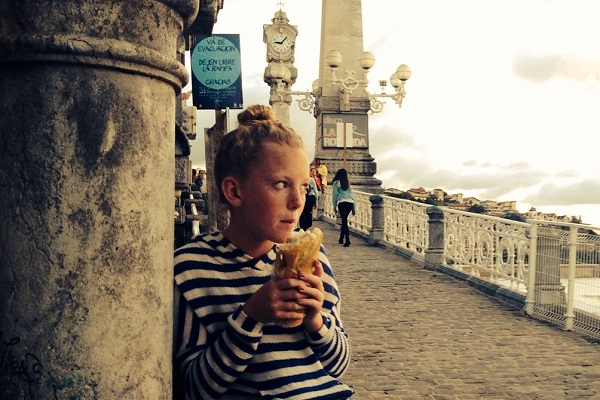 A tortilla de patatas is as ubiquitous in Spain as a hamburger is in the US…if a hamburger were eaten for breakfast, lunch and dinner.

Unless you were raised in Spain, a “tortilla” probably has you picturing a thin, round wrapper of taco dominion. Not even close. In this case, tortilla refers to a pan cooked “cake” of mouth-watering confit potato slices and onion bound by custardy eggs. Stunning in its simplicity, a tortilla is the ultimate people pleaser – comforting, filling, cheap, versatile and delicious.

There are many theories about the origin of this dish that has been a staple of Spanish cuisine for nearly two centuries. Details aside, it is fair to assume that we owe Christopher Columbus and his explorer pals for bringing potatoes from the New World – a contribution known to have saved millions of lives from starvation during the 19th century. (Tuber geeks, I encourage you to read a riveting exposé of Spanish potato cultivation in the Canary Islands by my friend Igor Cubillo here.) First discovered in the high Andes of South America, potatoes are thought to have arrived in Spain in the 1530s. This is a bit of deduction however because, being busy learning the spud’s potential, the Spanish didn’t bother to document the arrival of their new starchy friend. Realizing the tantalizing allure of tater, tortilla de patatas became one of the most common dishes in homes and restaurants throughout Spain.

There is no one recipe for tortilla de patatas. Rather, the formulations vary widely across regions. Strong words can be heard in the controversial debate over critical elements such as green peppers, peas, chorizo, eggplant, mushrooms, diced ham and, in Basque Country, Cod fish. The structural integrity of a tortilla, be it like dry-stacked planks or loosely bound wet mortar, is like a fingerprint revealing a Spaniard’s identity. But everyone agrees on one thing, their grandma’s recipe is the best. 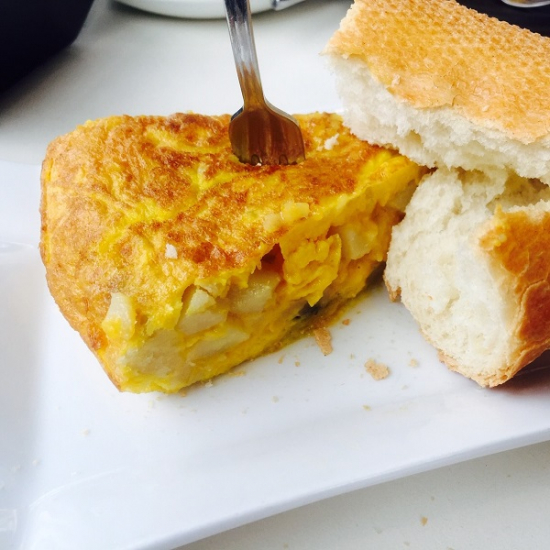 The pale but savory tortilla of Basque lineage.

The rich and swarthy darker cousin in Madrid.

Avoiding patatas politics, I will share the most basic tortilla recipe with full disclosure that I learned from a Basque, Chef Jose Luis Uribe, and therefore, I will sorely disappoint my Madrilleno friends with the paler version of their rich, brown counterpart. Regardless the shade, tortilla is a perfect breakfast or lunch with a green salad and a dry white wine. Yet Basques were not satisfied with plated patatas. Instead, they saw fit to place tortilla into bocadillos – yes, potato cake sandwiches (sorry, Dr. Atkins.) Chef Uribe was raised eating these carby creations daily, sometimes popping into the kitchen at Arzak to see if his father’s buddy, Chef Juan Mari, might send him on his way with a tuber treat. Yet, he divulged that even the tortilla flipped by the father of Basque gastronomy did not hold a candle to his grandmother’s recipe which included chopped parsley, garlic, and cured chorizo.

In the Kitchen in Amelia
Scroll to top