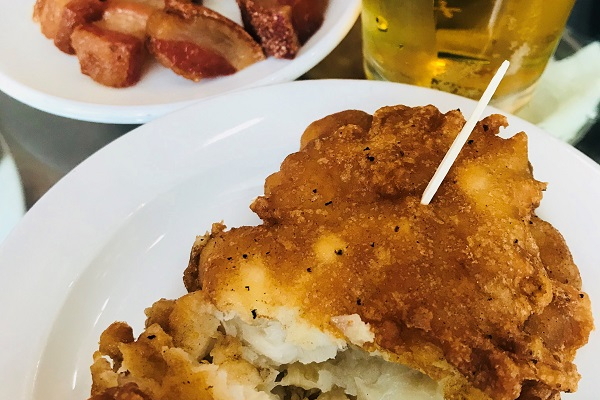 Bacalao is Cod fish that has been preserved by salting and drying, a process that dates back at least 500 years. Accounts of French explorer, Jacques Cartier, depicted a virtual armada of Basque ships fishing for cod off the Grand Banks off Newfoundland. Indeed, it was the creation of bacalao that enabled the fearless Basques to feed hungry sailors while crossing the world’s oceans in search of whales, cod and other catch.

Before it can be eaten, hard planks of bacalao must be rehydrated and desalinated by soaking in cold water for about three days, changing the water two to three times a day. If you have access to a cool, clean stream or river, do it the way clever inland Basques have for centuries – string it to a rock in the current and let the salt wash away.

Once rinsed, the flavor and firm texture of rehydrated bacalao are nothing like the cod that takes a direct route from ocean to table. The salt cod is perfect as a versatile filling for croquetas, tortilla de patata, stuffed piquillo peppers, served stewed as Bacalao a la Vizcaina, or simply fried.