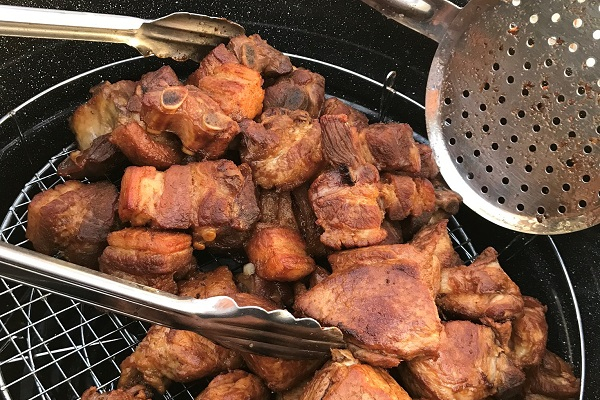 We can thank the Spanish for bringing pigs to the new world but we owe the brilliant cooks of Mexico for the creation of Carnitas. Michoacán, Querétaro, Jalisco, Hidalgo, Mexico state and even the capital claim rights to the dish but Michoacán popularly holds the title. A method of slow braising or simmering pork meat in pork fat (preferably lard) for several hours until tender, yields golden meat that shreds at the touch yet offers crisp edges.

Traditionally, carnitas is cooked in large copper cauldrons, painstakingly crafted by skilled metal workers, to evenly disperse the heat. Carnitas gluttons like myself, rely on a selection of meats including: pork shoulder with bone and skin, pork back fat, rib (costillas), lean meat (maciza), thick skin (cueritos) with meat, and ears (orejas) – yes, ears. But, historically, virtually all parts of the animal would grace the bubbling bath including lung, belly, cheek, heart, testicles, liver, tripe, tongue, and kidneys, among others.

The meat is seasoned with a mix of spices called “Hierbas de Olor” or herbs that smell: marjoram, thyme, and bay leaf. However, preparations may also include chili, cumin, oregano and garlic. Over time, other ingredients have come to provide regional twists, such as the addition of orange juice and even Coca Cola. Evaporated milk may be added toward the end of cooking to increase the caramelization.

The meat is typically served with chopped cilantro, diced onion, salsa, guacamole, lime, and refried beans. It may be assembled as tacos, tortas, burritos, or used in tamales. In Guadalajara, Jalisco, humble carnitas are elevated to legendary status in Tortas Ahogadas, a sandwich served on a salty birote wheat roll and drowned in a tomato sauce with chile de arbol.