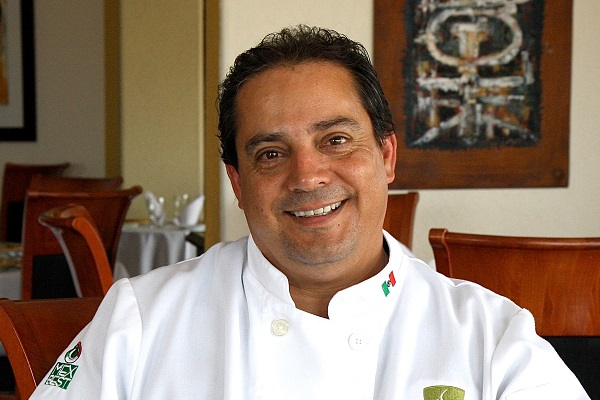 Juan “Martín” San Román is a Mexico City native with Basque blood in his veins. A long time American citizen, he has owned and operated several acclaimed restaurants in the U.S. and Mexico, and has shared his talents broadly with both patrons and a large audience who have enjoyed his TV programs. During his career, he proudly represented Mexican gastronomy in England, Switzerland, Russia, Morocco, France, Japan, Singapore, and the U.S, even competing in the Olympics of gastronomy, the   Bocouse d’Or. Therefore, it is not surprising that Chef San Román is recognized by his peers and being among the most respected ambassadors of Mexican cuisine.

Today, Chef San Román, continues to evolve his own style of Baja Provençale Cuisine, marrying his rigorous French training with Spanish and Mexican flavors. Years of executive experience in all types of kitchens, from hotels to intimate dining rooms and catering, have made San Román a highly-qualified restaurant consultant. Yet, he is at his most impressive in the kitchen. I have had the pleasure to cook with Chef Martín and marvel at his impeccable training and seemingly effortless orchestration. His experience and crowd-pleasing creations have made him a highly sought-after caterer in San Diego and Tijuana.

Tucked into my favorite booth in the corner of the Dobson’s bar in San Diego, savoring bite after delectable bite of his sweetbreads in a red wine reduction, he humored me with his responses to The Chat:

Spanish/Basque food aside, which cuisine most excites you and why?
I love French cuisine for the quality of the products, the variety, the techniques, presentations, and fine flavors of France.

What meal most reminds you of your childhood? Who prepared it?
Chile morita enchiladas made by my grandmother was my favorite plate and also carne al pulque (beef in pulque stew) made by my mother.

What culinary trend/fad do you refuse to follow?
I refuse to use foams or too many flowers on the plates. The effect is overly artistic and little in flavor. These days, many chefs spend so much time decorating a plate that when arrives to the customer, it is cold!

If there was a soundtrack for your work life, who are the musicians/groups on the recording?
Led Zeppelin, Bread, America, Cat Stevens, Doors, Mana, Roberto Carlos, fleetwood Mac, Queen, James Taylor, Bee Gees and Rod Stewart.

Where will I find you on your day off?
On days off I am regularly at home! I very much enjoy being in my home, tending my garden and chickens. I also love watching Formula 1 racing and Soccer.