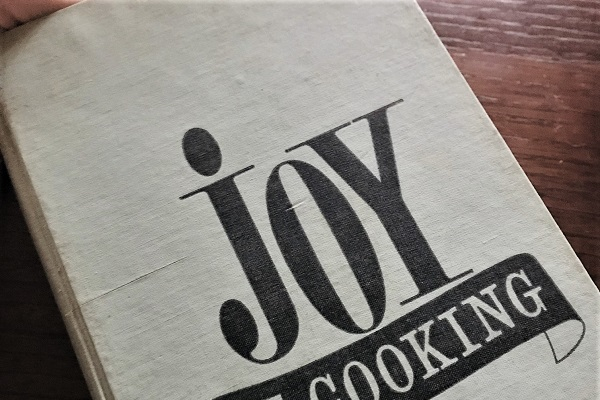 With the passing of my father-in-law, I received a well-used 1967 version of the Joy of Cooking, which I carefully glued and mended in anticipation of many years of further use.

Irma Rombauer self-published the first Joy of Cooking in 1931 with an insurance payout from her husband’s suicide amidst the Great Depression. Her goal was to instruct society wives, who no longer enjoyed a kitchen staff, to began cooking for themselves. Thus the instruction “stand facing the stove”, though comical today, was pragmatic in 1931.

Through this extraordinary archive of American history, we catch a glimpse of a novel cuisine, before the plethora of world spices and techniques washed over our country. For example, Irma provided instructions to skin a squirrel (with illustration) for a truly authentic Kentucky Burgoo (a mixed meat stew).

To my delight, page 56 includes a shout-out to the “Taco” just below the Canape snails recipe. That the recipe is billed as a “fairly mild” version with green chiles and cayenne pepper, is adorable. But the real head-scratcher is the measurement of tortillas: “1 can tortillas: about 18.” Apparently, tortillas came canned in fat. It seems that St Louis, Missouri, Irma’s hometown, was a bit too far from the growing Mexican American population in the Southern border states to gain access to the real thing.

Poor woman. As if the Depression wasn’t difficult enough already. 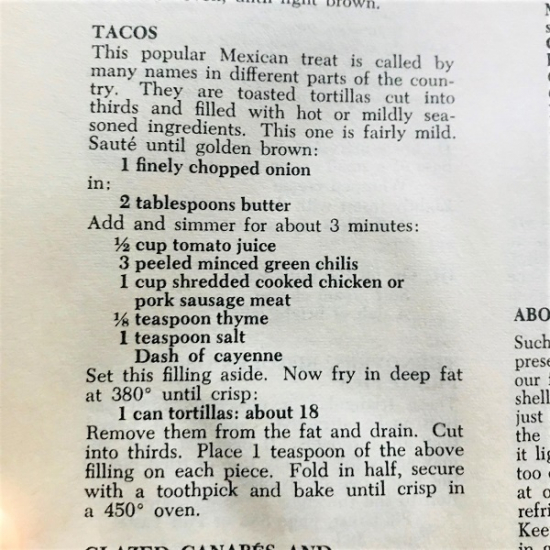 A Great Depression-era recipe for tacos.