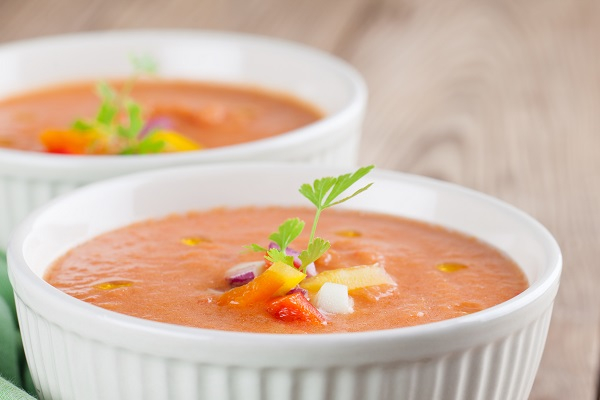 In the heat of summer, gazpacho appeals on a number of fronts. It is deliciously refreshing, it can use up surplus tomatoes and peppers that tend to stockpile in mid-summer, and there is no need to heat up your kitchen to put dinner on the table.

As I was learning Spanish and Basque cuisine, gazpacho was the rare recipe that was easier than I thought it could be. The cold, thick, vaguely creamy version specific to Andalucia, Spain, required forethought to begin a day in advance, but that is the greatest challenge it presents. The overnight mingling of roughly chopped ingredients is followed by 20-minutes at the blender emulsifying the soupy salad with olive oil. The secret ingredient is dried French baguette which contributes to a hearty, but smooth texture. You’ll be surprised how much the texture and color resembles a cream-based soup.

On my first gazpacho attempt, I was feeling pretty proud of my efforts and invited a Swiss guest, Rachel, who was staying in our Airbnb property to dine with us. I’m generally skittish about testing new recipes on non-family members but I took confidence in the fact that a Swiss woman would hardly be a tough critic of gazpacho.

To elevate the presentation, I placed bits of brightly-colored veggies and a chartreuse celery leaf in the bottom of each bowl, then dramatically ladled the soup over the edible artwork at the table. As a last touch, I floated a freshly toasted garlic and Parmesan crouton on the top of each bowl to oohs and aahs from my diners.

We chatted about the trials and tribulations of learning English. Rachel from Bern, repeatedly dipped into her soup, seemingly enjoying the dish. When the bowl was empty, she put her spoon aside she said, “That gazpacho is exactly as I remember from trips to my parents’ summer home in Andalucia. It was so good, it brings back wonderful memories of Spain.”

I sat stunned and made a mental note to never assume! Lesson learned.

The Esquites of Peña de Bernal
Scroll to top