Cook With A Plan 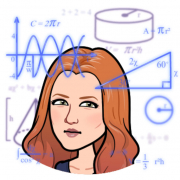 We’ve all been there. You’ve started to make a new dish and find yourself staring dumbfounded at the name of a Houdini ingredient that suddenly appeared in the recipe out of thin air. You confidently reach step 3 only to grasp the time implication of step 4—marinate over night—but your guests arrive in 2 hours. As you are plodding along on a seemingly simple new dish, the recipe calls for a “ricer.” You think, “what the hell is a ricer?” Or, one of my favorites, you misread the tiny type on your iPhone, dumping 2 Tbsp. rather than 2 tsps. of spice into your dish and grossly over seasoned the meal. These facepalm moments are all too common and enough to discourage even the most gastro curious cook.

What if I tell you that you can virtually eliminate these anguished moments and the burst of profanity that often follows? If you were a Boy Scout, you already know how. Be prepared. Now, there are few acts in life for which the preparation stage is as exciting as the main event, foreplay being the only exception that jumps to mind. Indeed, preparing to cook is tedious but if done with care and skill, you will deliver mouth-watering results to the table, as desired and on time, which is universally considered sexy as hell.

To avoid recipe killers, first read the entire recipe from beginning to end. No really. Do it.

Then, develop a workplan in four easy steps:

If you’ve read the recipe, obtaining the ingredients will be straight-forward.

Next, break the recipe into logical steps—often these are defined by points at which new ingredients are handled or the cooking method/task changes. Then, list the ingredients and equipment needed to accomplish each step. Before you begin, retrieve the items from around your kitchen to avoid delays while you wage the inevitable hunt for a little-used appliance.

Now the only thing between you and culinary kudos is your mise en place. When you watch a cooking show and the chef effortlessly dumps little bowls of pre-cut, measured ingredients successively into a pot and—voila!—coq au vin is ladled forth after the commercial break, that is mise en place. Simply put, prepare everything that you can in advance of cooking and/or assembling the meal. Do it religiously. Not only will it save you time, but it will avoid common mistakes like dumping too much spice into the pot, forgetting an ingredient, or whittling down a finger in a last minute rush.

Here is a sample workplan for Tortilla de Patatas: 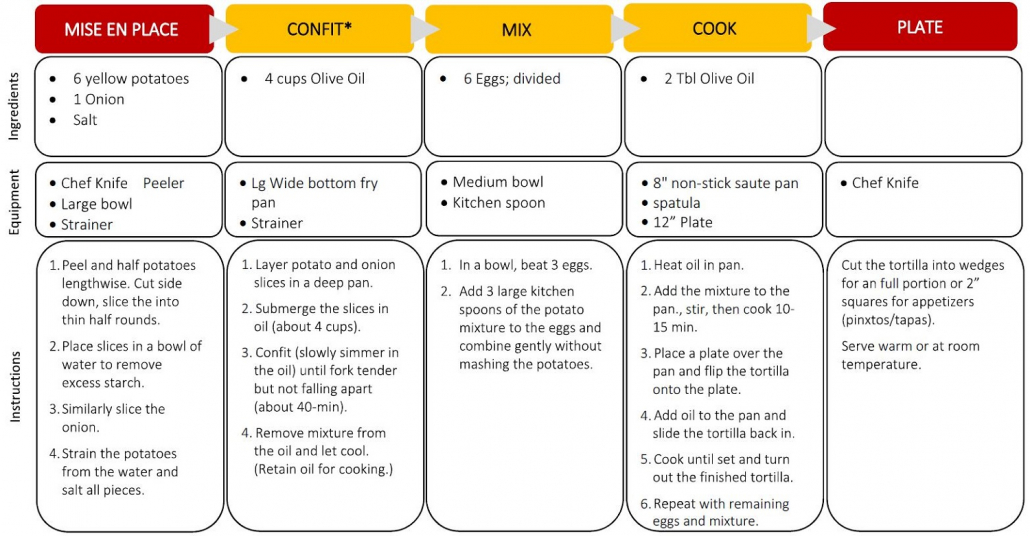 With your ingredients recipe-ready in the proper quantity and equipment at hand, work your way smoothly across the plan searing, simmering, blending, battering… with everything at your fingertips.

Once you train yourself to cook with a plan, you are ready to apply the principles to larger, more involved meals. Think about a Thanksgiving dinner. You might have 5 or 6 workplans in process simultaneously. They can be aligned for masterful multi-tasking that will have you strutting to the table with a golden turkey like a proud peacock (how’s that for imagery?) In fact, it is exercise of careful planning, not the workplan itself, that will make you an excellent cook. I’ve seen Chefs casually weave more than 100 steps into a 6-course meal, never referencing a single piece of paper. Without exception, they do it through careful purchasing, thorough mise en place, and a well-equipped, ready-to-roll kitchen. You can too.