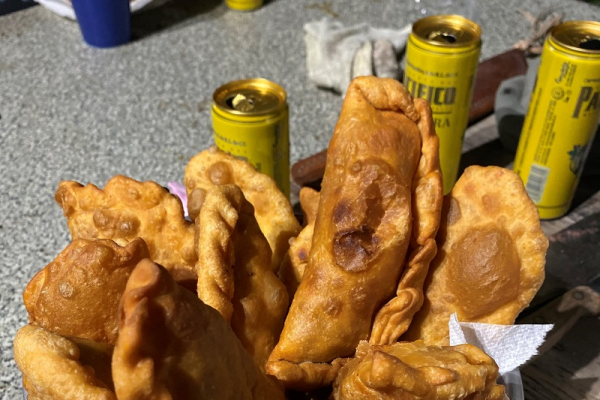 I have been a fool. I have been passing the pandemic in Todos Santos, Baja California Sur, counting the days until I can return to my food adventures around Mexico. There is still so much to learn, and time is wasting. Even as I delight in the bounty of land and sea that we enjoy on this peaky spit between shores, I have yearned for something new. As I work through a dozen fleshy oysters sweet with Pacific liquor, I wonder what treasures await me in Veracruz, Hermosillo, or San Luis Potosi. While excavating chocolate clams from their sandy enclave to make molten stuffed clams, I fixate on pre-Hispanic treats I have only read about in books. While grilling monkfish tail over mesquite coals, I imagine the food stalls of Oaxaca heaped with vibrant fruit flesh and seemingly innocent looking chiles, each waiting in turn to titillate and torture my taste buds. I impatiently take solace in the fact that these far away jewels in the culinary crown of Mexico have remained through millennia, so another year out of reach is not likely to see their extinction.

It took only an invitation and one afternoon to completely correct my misplaced longings. My friend, Ariel Ruiz, is the son of a long-established Todos Santeño family. On occasion, he has raved about his mother’s empanadas being unmatched. So, when I heard that she would be making them, I hinted and prodded in a shameless spectacle of wanting until he graciously invited me to join them. Sure, I have made empanadas before and they have always been well received. What is not to like about a hot pocket of meaty goodness? But I have always felt that they fall close to the line that divides “worth the effort” from “meh” because the effort is substantial. I would learn that the empanadas of the Ruiz home, although not for the casual cook, are miles from meh.

I have luxurious kitchens, well-equipped and custom-designed to my cooking preferences. But, in recent months, I have become deeply envious of the outdoor, wood-fired kitchens common in Todos Santos. I find myself wanting to trade in my Viking stove for an expansive brick-based grill. What can my granite composite sink accomplish that a bucket with hose water cannot? Spilled something, not a problem! Dropped food, it matters not! Not to mention the obvious advantages for outdoor social distancing in the times of COVID. While we worked in the open air kitchen, children circled, snatching bits of chopped beef from their grandmother’s cutting board. Three curious cats, Guantes, Panchita, and Simon, patrolled the patio assessing the physics of scraps falling to the concrete floor. And Toey, a burly black lab mutt, hoovered his way past our legs on regular intervals, lifting his vacuum snout only to sniff into the air for a hint of what was yet to come. 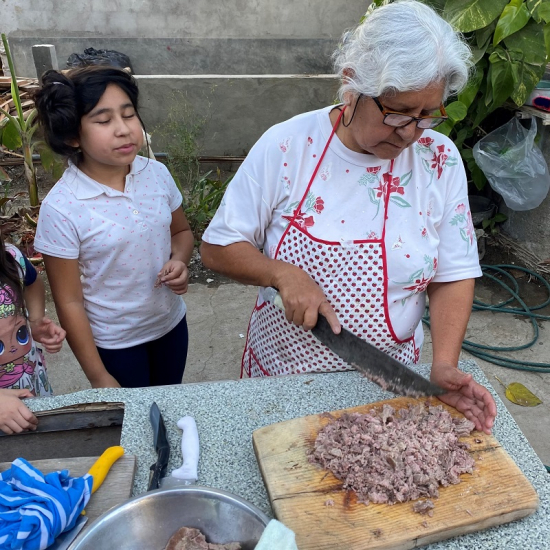 When I arrived, the fire was high on the grill and the matron of the family, Esperanza, was well in motion chopping chunks of the beef that had been cooked in a large pot of water over the fire with bay leaves, cloves, garlic, and salt. I could see by surveilling the scene that she has already charred chiles, prepared the meat, and sliced peeled potatoes into thick sticks. I admired the tiny woman, standing only a few inches above her 10-year-old granddaughter. A shock of pure white hair tied up in back, framed a kind face lined with the topography that only comes from the joys and trials of raising children. She wasted no time finding a job for me. I peeled, seeded, and cut the poblano chiles that had been blackened on the fire and were resting in a plastic bag. Meanwhile, Esperanza liquified California chile peppers with a little of the beef stock (jugo) still simmering over the coals. This produced a brilliantly colored red-orange sauce that, to my surprise, did not taste like much.

Next, an immense sauté pan blacked from use but with a shining metal interior went on the fire. Esperanza scooped in a large glob of lard which melted in seconds. An eyeballed amount of flour went into the hot oil as she continually stirred the mixture. Ahhh, I thought, we are making a roux! As it thickened and bubbled, giving off a toasted cracker scent, she stirred ceaselessly, the shush of the metal spoon on the slick bottom of the pan offering a rhythm to the sporadic crackling of the fire. 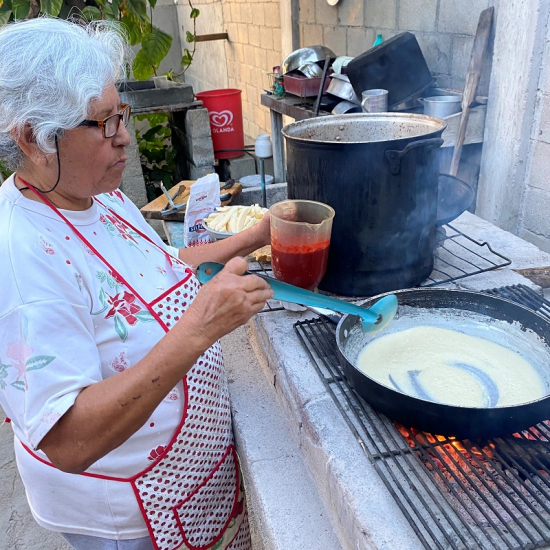 Suddenly, with no perceptible change that I could report, she declared the roux ready to receive the blended chile mixture. In it went, reserving a bit for some future undisclosed mission, with a healthy amount of black pepper, two cubes of beef consume, and ample salt. We can debate the culinary merits of powdered consume but, in my experience, few favorites of the Mexican home cook reach the table without its savory embellishment. Feeling too much the spectator, I took over the relentless stirring duty until it was deemed the right moment to add the chopped beef. The result was a thick and richly flavorful filling unlike any of the empanada fillings I have ever concocted. 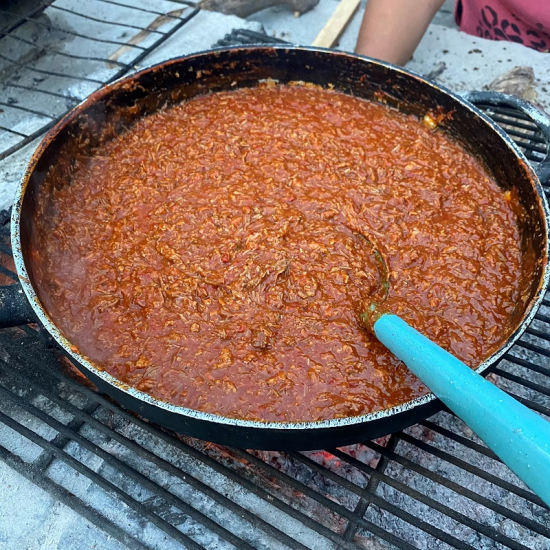 Esperanza’s daughter, Zonia, arrived just in time to take on the dough. Now, ladies and gentlemen, this is where we separate the wheat from the chaff. If you are not willing to engage in 30 minutes of relentless hand-to-dough combat, better to leave this to those who have the necessary stamina. Into a large bowl of flour went the better part of a large tube of lard, which was rapidly cut into the flour by Zonia’s lightning fast fingers. The mixture was moistened and tinted orange by the addition of some remaining chile liquid. Then the fun began. 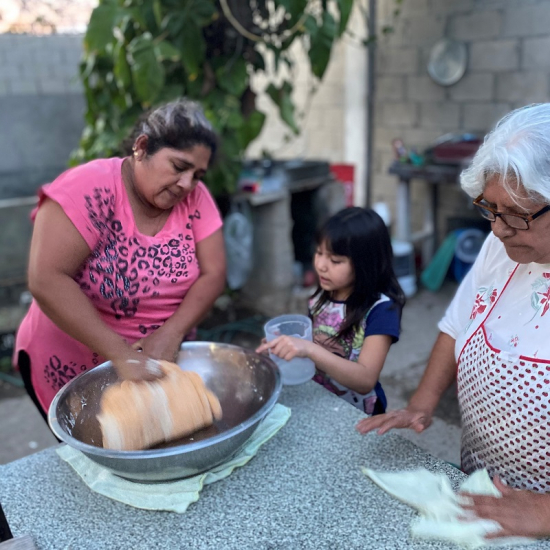 Zonia worked that dough like a boss! The 4-pound mass was stretched, turned, folded, and beaten into submission, slowly becoming perfectly consistent and elastic under her command. I studied Zonia’s technique as she tore through the dough like it was pillowy ciabatta. Esperanza felt I should have a turn. In hindsight, it is possible that she needed a chuckle after several hours in the kitchen. So, I stepped up to the counter ready to rumble, my chest puffed, and hands poised like bear claws at the ready. However, I severely underestimated my adversary. Its stubborn gluten fought my futile efforts. After 10 minutes, I was sweaty and panting. I stared at my opponent and I knew I had been beaten. The blob’s break was over, and it went back into the ring with Zonia where, after one last thrashing, she put it down for the count.

As the defeated ball rest in peace under a dish towel, I saw that Esperanza was bellied up to the fire, frying the potatoes in oil. Batch after batch, golden brown fries emerged from the oil until, at last, everything was ready for empanada fabrication!

Esperanza began to squeeze little globs of the dough up through her two fists, pinching off a perfectly sized (think racquetball) orb of dough and placing it in a large metal bowl. One ball after another lined the bowl until the parent mass was gone. The next task was to convert these tense little balls into thin 6- inch rounds. How hard could that be, right? But damned if that dough, now strewn about in 50 pieces, was not as strong as ever. Zonia relied on a small rolling pin to achieve the aim. Esperanza did little more than pinch the ball into a disc and then slapped the disc back and forth between her open palms to form a perfectly proportioned crust. I stared at the immutable ball in my hands that would neither roll, pinch, nor slap substantially from its present shape. The minute I stopped rolling over the dough, it shrank to half its prescribed size, defiant and mocking. Having been beaten once already by this foe, I did what any sound cook would do. I left the task to the experts and turned my attention to sealing empanadas. 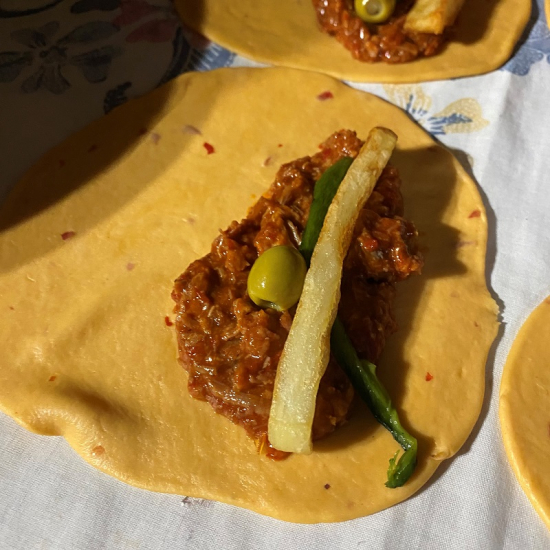 Night had fallen over the patio as family members began to arrive and align around the outer edge of the patio in plastic chairs. Ariel placed a shop light over the work area to keep the process moving. Bathed in fluorescent light, we placed a large spoonful of meat mixture, a potato stick, a slice of roasted chile, and one green olive with pimento atop each round. One side of the round was lifted up and over the mound to meet its mirrored edge. With a deftness of hand known only by vascular surgeons and concert pianists, the ladies demonstrated the proper technique to press and twist the edge into a tight yet decorative seal. While I admit that my first effort lacked sophistication, I defended its virtuosity on a purely functional basis. But soon, my fingers learned the pacing and path to a perfect corded edge. I welled with pride, much to the amusement of my seasoned cooking companions. 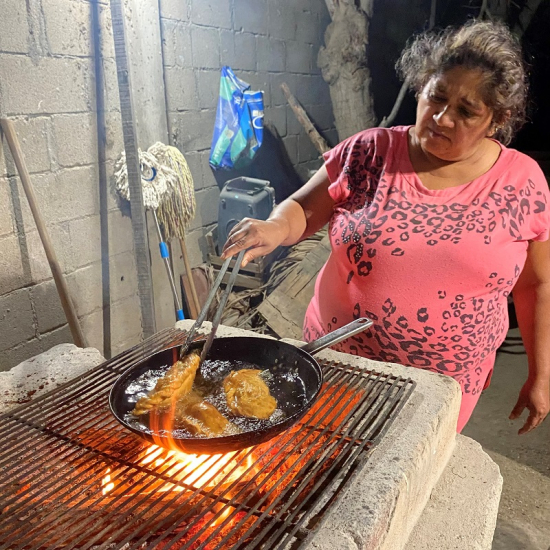 The fire was stoked with wrist thin limbs to bring a large shallow pan of oil to deep frying temperature. Three at a time, the empanadas slid into the bubbling oil, billowing up to a thin, golden, crisp crust. There was not a hint of doughy-ness left when the hot packets were lifted from the oil into brazen, eagerly-waiting hands of the hungry crowd. One might think of the filling as the star of an empanada but, now having experienced the perfect crust, I think not. At the highest level of the art, crust and filling offer a duet of melodious textures and flavors punctuated, not penetrated, by a lone green olive. It was empanada perfection. 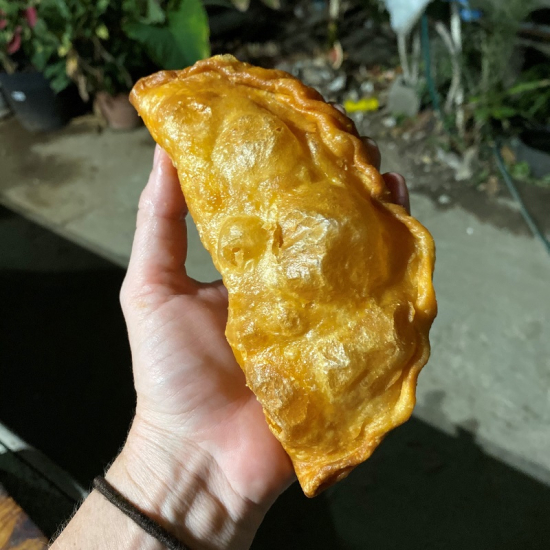 That night, surrounded by family, albeit not my own, and partaking in as authentic a Mexican meal as can be found across the country, I realized the error of my ways. The culinary wonder of a place is not defined by its markets, nor dictated by restaurant menus but rather, it is held within the hearts and minds of excellent Mexican cooks who learned at home and continue to delight the people they love with mouth-watering hospitality.