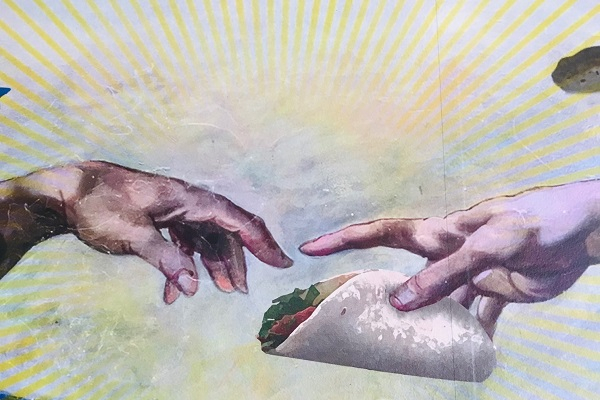 Approximately 18 percent of the American population is Hispanic, with about 11 percent being specifically of Mexican descent. As a result, every major city in the US is harboring a taco-trove. Some are brightly adorned, mariachi-infused tourist destinations but others are low-key neighborhood collectives sharing century-old family recipes from every corner of Mexico. In either case, a day of exploration is a day well spent.

This weekend, visiting a dear friend, Christine, from St. Paul, Minnesota, we put my taco-trove theory to the test across the Twin Cities. To start our taco tour, Christine wanted to revisit her childhood taco benchmark from Boca Chica, a landmark with more than 50 years serving the people of St. Paul. 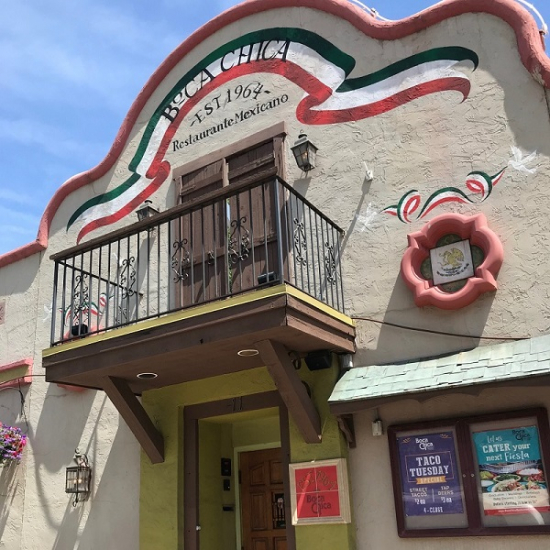 The “deep fried flour taco” is a perfect embodiment of the not-so-authentic but coveted tacos of my youth. A flour tortilla is filled with ground, seasoned beef, tomatoes, shredded lettuce, and cheddar cheese before a quick frying transforms the tortilla into a crunchy, flaky shell. I grew up with a similar understanding of “taco” in Michigan. However, my family recipe included frying flour tortillas in oil and – believe it or not – dressing the lettuce, tomatoes and cheddar cheese in Wishbone® Italian dressing. Boca Chica was a less tangy, yet delicious, return to my earliest Mexican food memories. 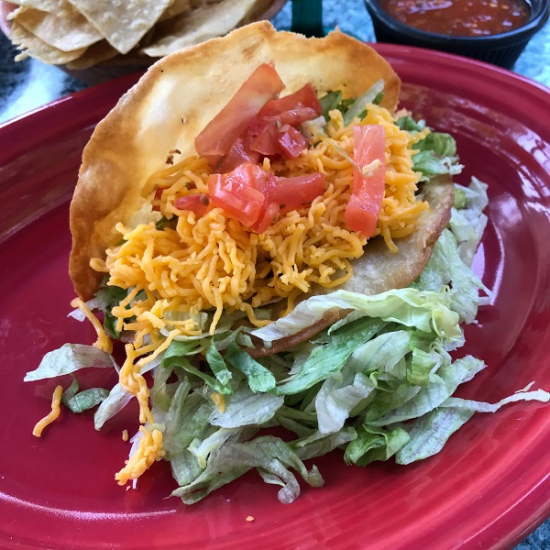 Next up, Taco Libre delivered a more authentic menu including lengua (beef tongue), cabeza (head meats), tripa (tripe), tinga de pollo, pastor, rajas con crema, and huitlacoche. Owner Adrian Ramirez brought the flavors of Mexico City street food to the Twin Cities in 2015, and has grown the family business to include 4 locations. The signature dish is an 18-inch fried corn tortilla taco called a “machete.” We took the opportunity to do a half-and-half combo of cabeza and barbacoa and loaded up on pepper-packed toppings at the salsa bar while admiring the artistic wrestling motif throughout the store. Discussing our taco mission with an enthusiastic server, we were tipped off to two more taco shops in Minneapolis. 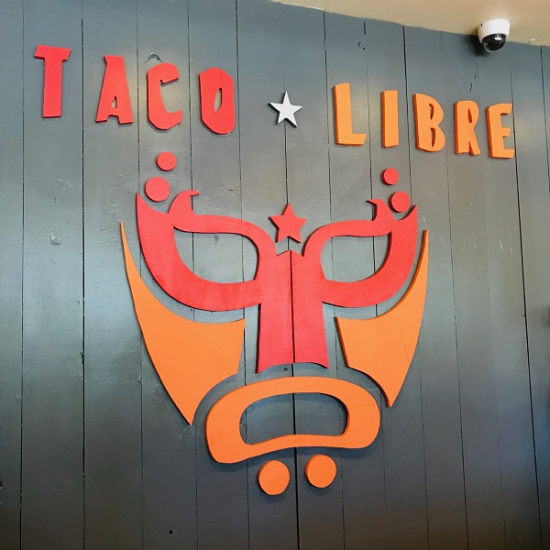 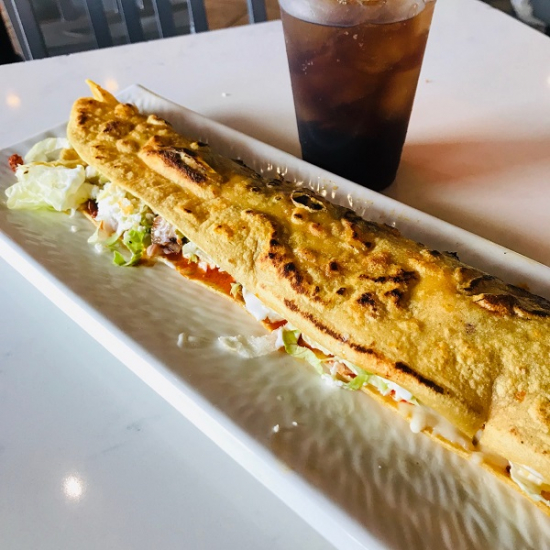 The 18″ machete with head meats and barbacoa. 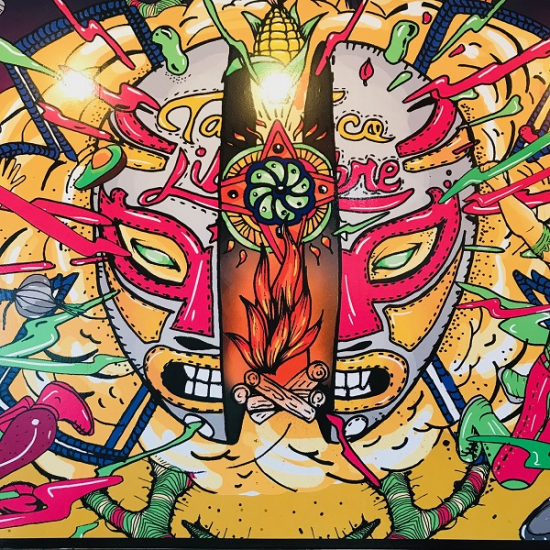 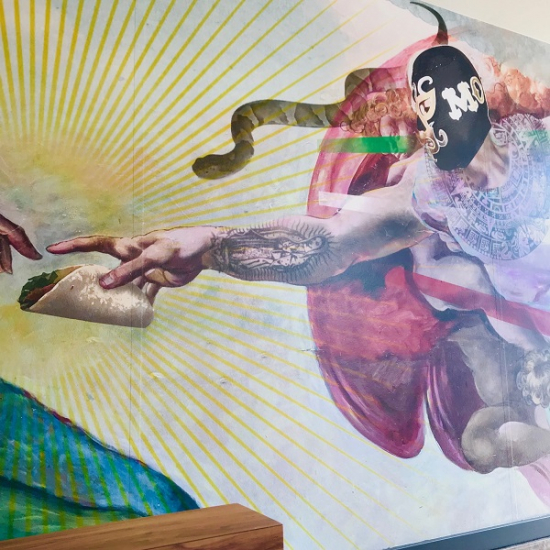 First, we made a stop at Nico’s Taco bar on Como. Nestled in a picturesque neighborhood, Nico’s hipster-friendly décor includes Frida Kahlo-inspired art and colorful concrete tiles. Our server was friendly and instrumental in selecting our next 3 victims: Puerco in salsa verde, chipotle shrimp and mixed mushroom. The menu featured 7 salsas alongside its 19 tacos, empowering a plethora of tempting taco pairing possibilities. Unfortunately, the festive décor, attentive service, and flashy toppings couldn’t compensate for underwhelming taco fillings. 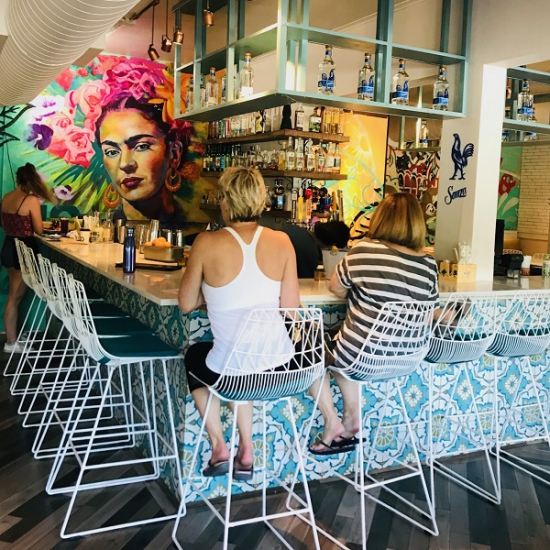 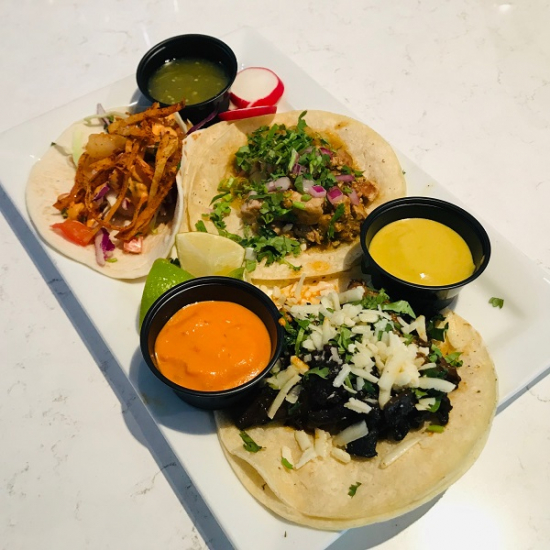 Lamenting the tummy space lost in vain, we headed to the heart of Minneapolis’ Latino community to peruse Lake Street eateries. We found a cultural melting pot embellished with vibrant street art. We entered Taco Taxi, a small bright yellow shop founded in 2005 by brothers Carlos and Hector Lopez. Family recipes include tacos al pastor and Jalisco-style goat birria so we ordered 2 of each and marveled at how easily they passed our lips into our already satiated, yet doggedly determined bellies. The Lopez brothers delivered intense flavor with quality ingredients at authentically affordable prices. 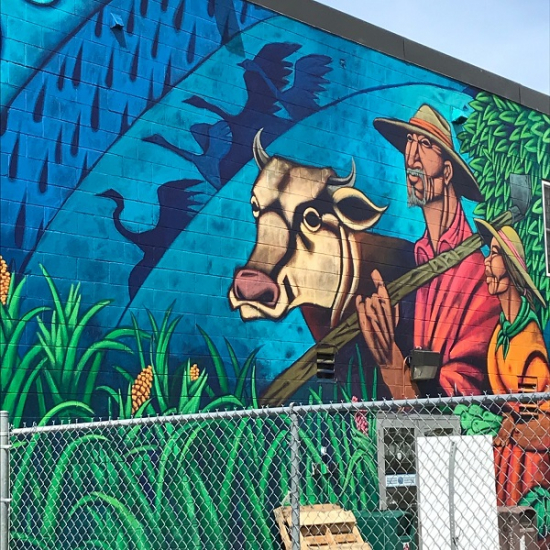 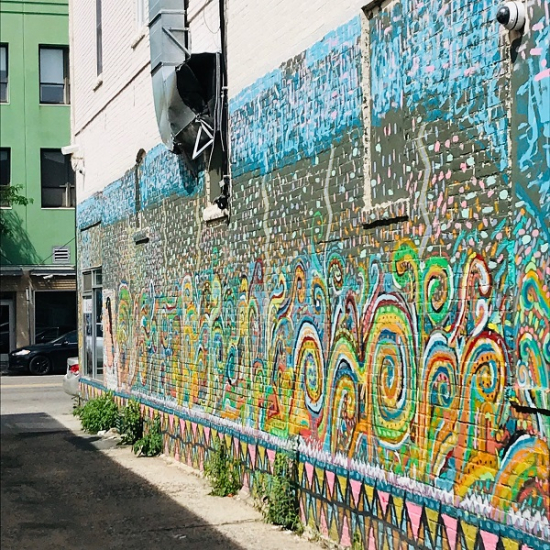 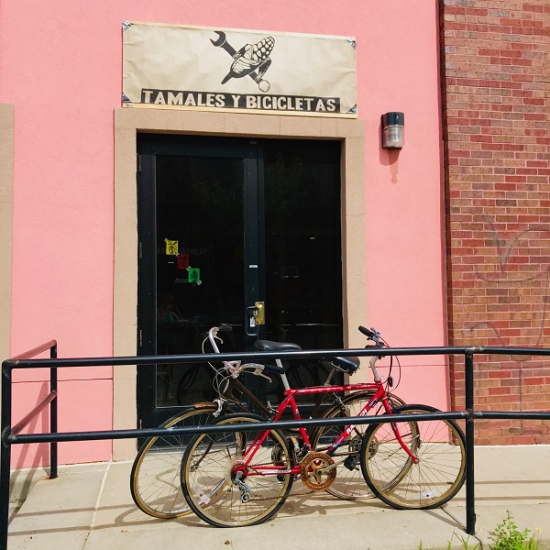 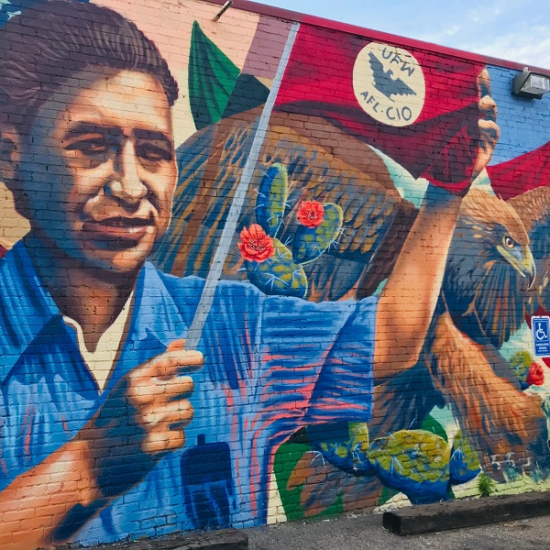 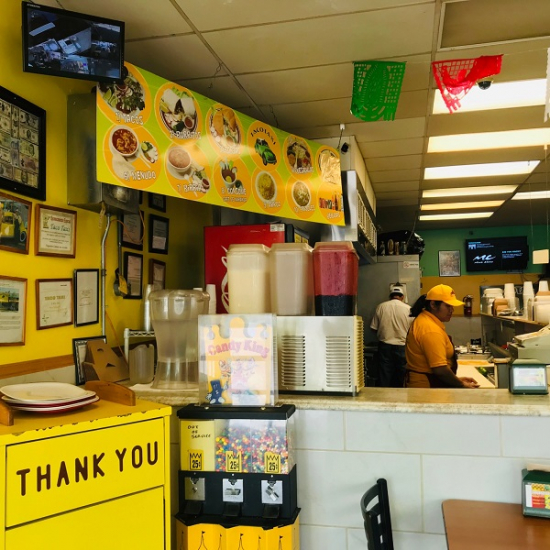 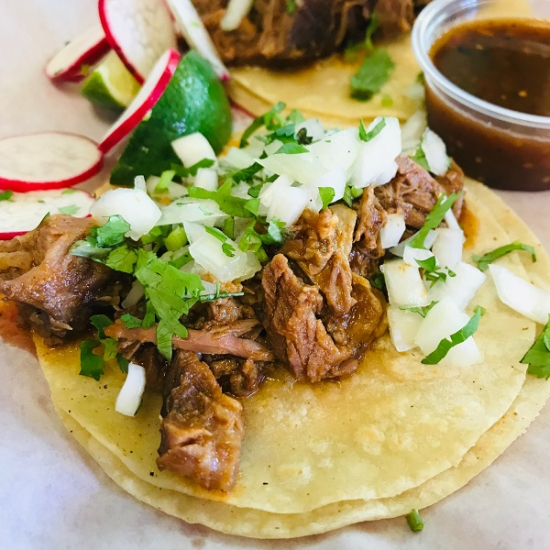 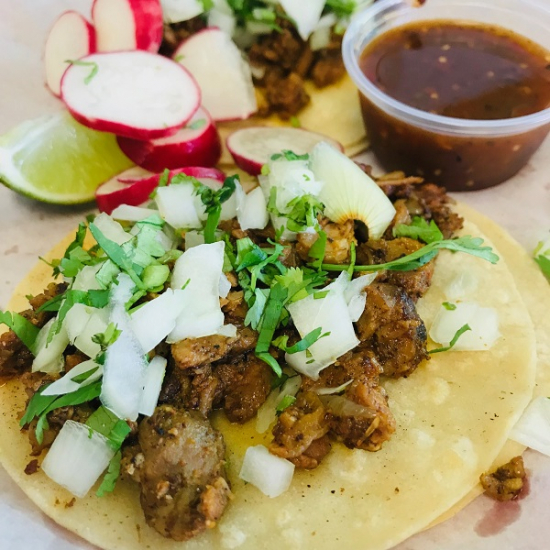 A late entry in the taco tour line up was a recommendation from a Mexican chef friend, Dante Vargas. Tacos El Primo is a modest food truck parked in the lot of Lake Laundry. Stepping up on a plastic pallet that barely brought me head-height to the order window, I succumbed to pure gluttony. The day would not be complete without a lengua (beef tongue) nibble and an ice cold Mexican Coca Cola. We sidled up to the sole picnic table under a shade tree, shared with a couple men from the neighborhood, and hashed over the aromas, colors, flavors and hospitality of our expedition. 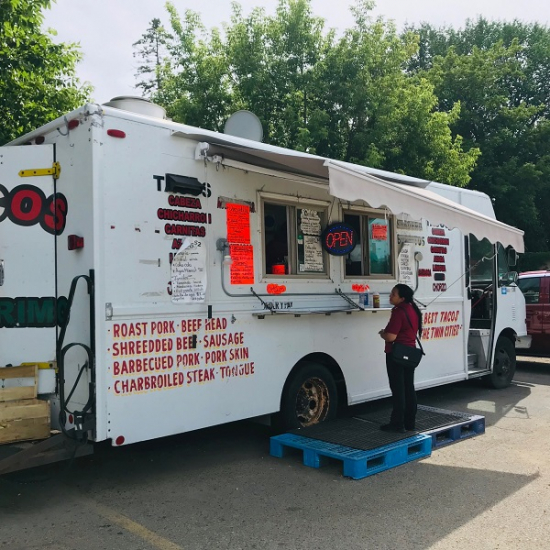 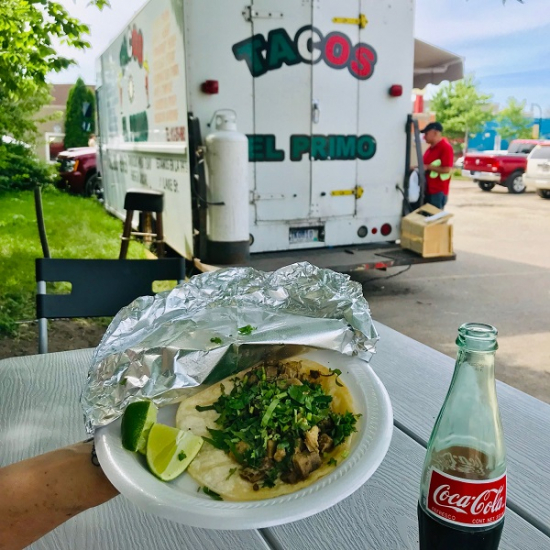 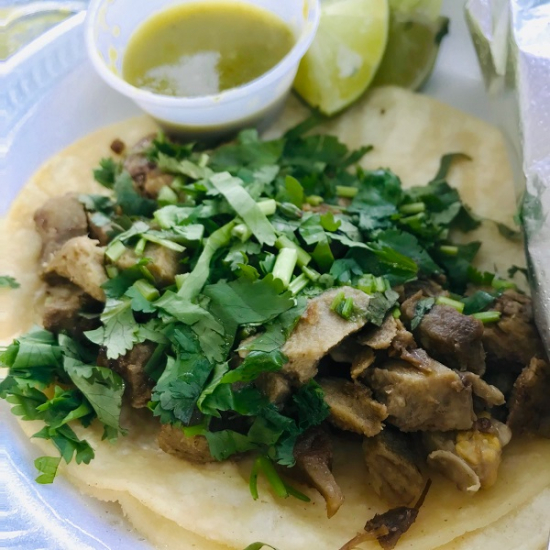 I am certain that we only scratched the surface of the Twin City taco-trove. Where there are sons and daughters of Mexico, there is surely succulent meat, fresh herbs, fiery chiles, and warm-hearted service. Explore sabor.

The Making of Lamb Barbacoa: Superstition, Sacrifice, and Suspense
Scroll to top