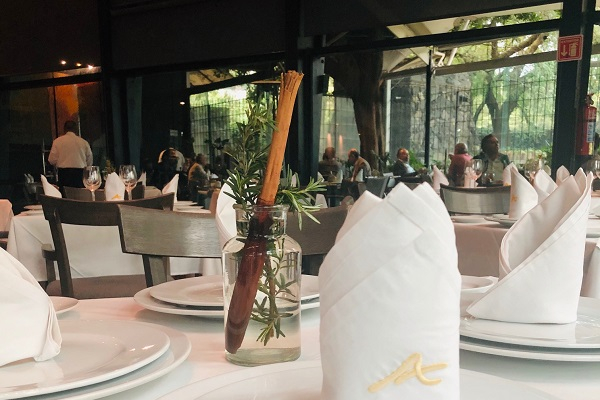 As I stepped into the atrium dining room of Alaia, the creation of chef-entrepreneur Alberto Ituarte, the memory of my one previous visit—more than 6 years ago—washed over me. The restaurant is formal by definition, with white linens and coated servers, but it felt like coming home. It is neither hipster nor avant garde, but rather the sort of restaurant where well-to-do families and groups of elder friends gather for special occasions. A steward of the cuisines of the Iberian Peninsula, for the past 17 years, Alaia has maintained an exacting standard when it comes to the traditional flavors one expects from the Basque Country, Catalonia, and Castile. Presentations are thoughtful and memorable but the success of the establishment rests in their flavorful, quality ingredients and highly talented kitchen led by Chef Israel Aretxiga. 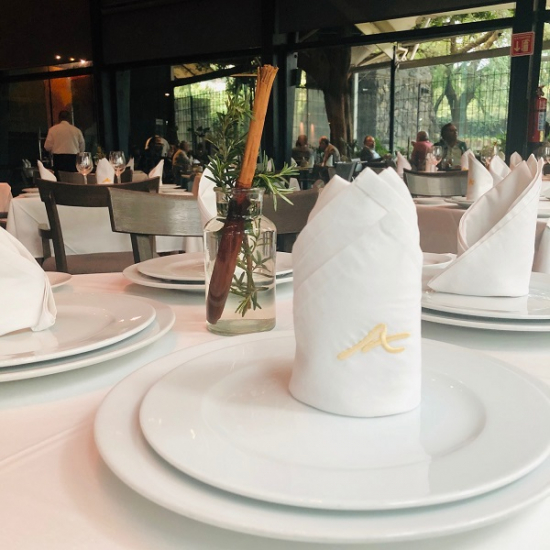 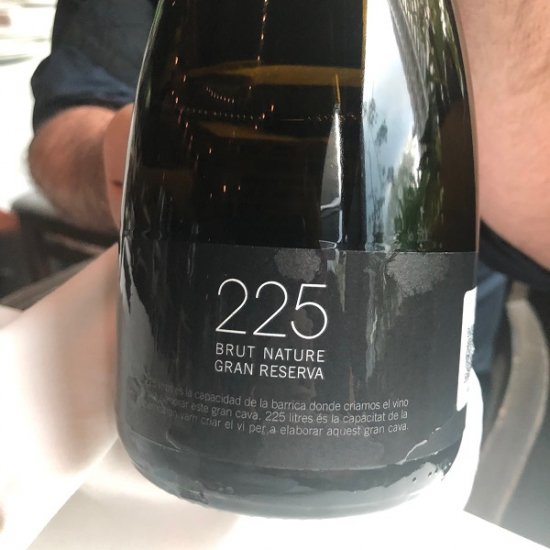 This meal calls for celebratory bubbles.

On this particular evening, a light rain spattered on the glass beside our table. Wind sent the lush greenery outside undulating and a gray sky accentuated the warmth within the restaurant. Just as a bottle of cava (Torello 225 Brut Nature Gran Reserva) arrived at the table, Chef Israel emerged from the kitchen to greet my dinner companion, Carlos Ramirez Roure, and me. We sat together sipping the extraordinary bubbles from a small production family vineyard near Barcelona as the men caught up on recent happenings. Before departing, Chef Israel asked if I was hungry and if I eat everything. Carlos’ laughter was enough to answer the question.

And so it began with three small bites: a Serrano ham croquette, molten inside and seated on a perfect aioli, a classic pan y tomate (tomato toast) with bonito and anchovy, and a brioche topped with foie gras. 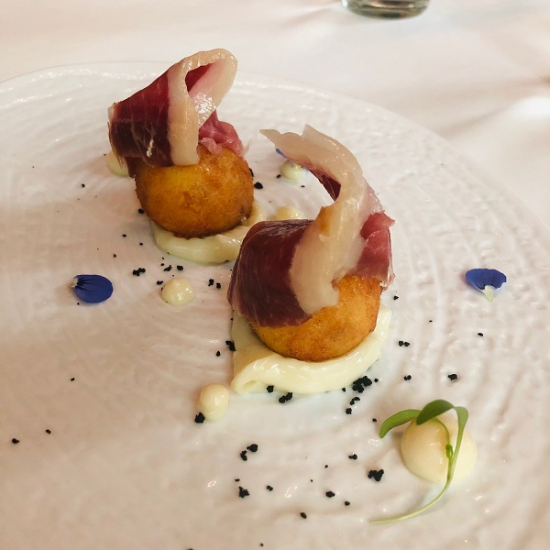 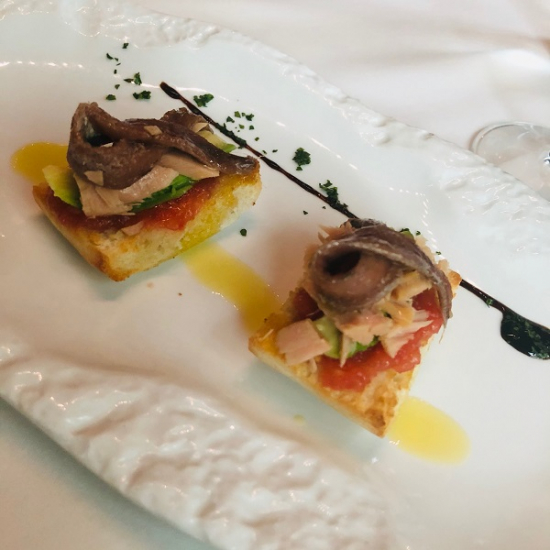 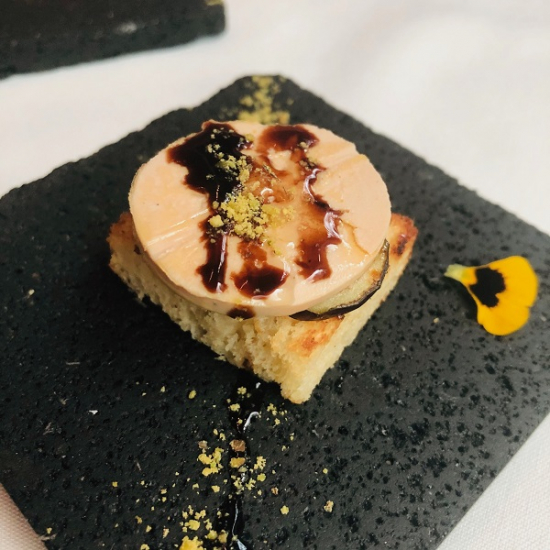 To accompany the next dishes, Chef sent us a bottle of Alonso de Yerro “Maria”. This 100% Tempranillo from the Ribera del Duero is everything I love about Spanish reds. The aroma jumped from the glass with this full-bodied beauty, teeing up the next dish, piquillo peppers stuffed with a brandade of crab and smothered in a thick, velvety pepper sauce. Especially for my Catalan companion, we received grilled octopus in Romesco sauce with confit potatoes. 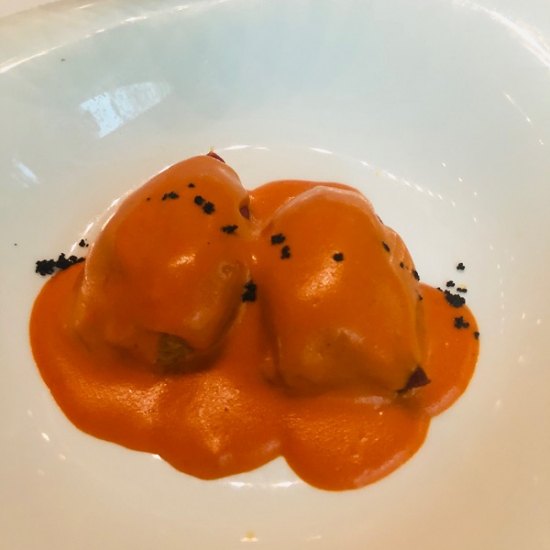 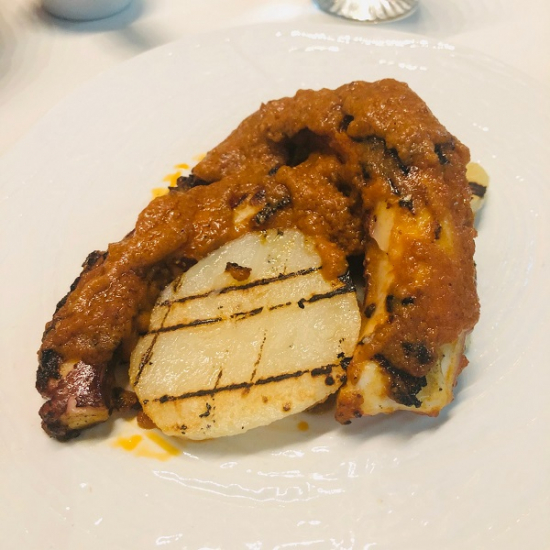 For the next course, Chef Israel appeared to grate a bit of white truffle over our savory oxtail raviolis. Yet no dish demonstrated the immense talent of the Alaia kitchen better than the rice in ink with lobster. The ink sauce was impeccable and the rice held a satisfying firmness at the center, as it should but rarely does. Though we could have stopped, I could not pass up the opportunity for a final entree of roasted suckling pig. The meat, soft and unctuous, hid under a golden lacquered skin and a green salad in simple vinaigrette balanced the richness. Nothing remained but a scattered pile of clean rib bones. 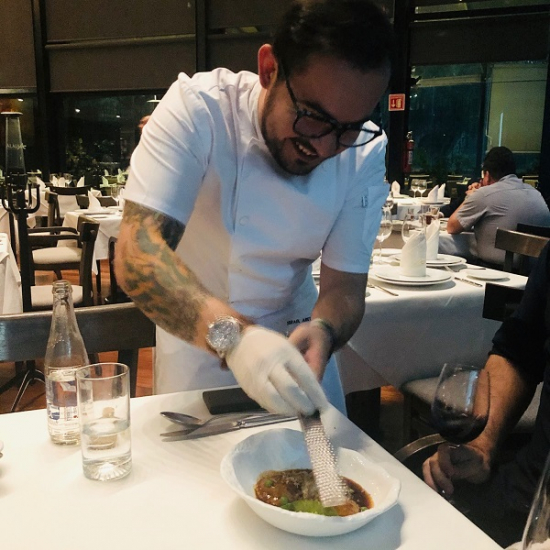 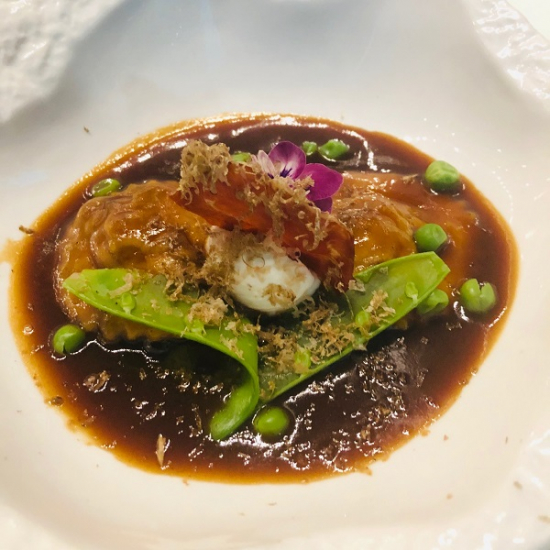 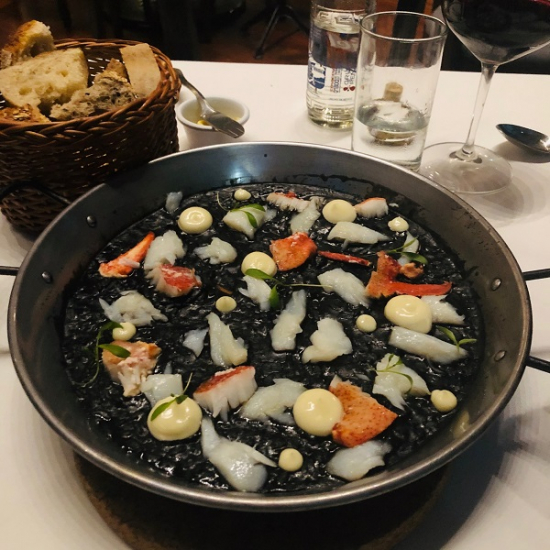 Rice in ink with lobster. 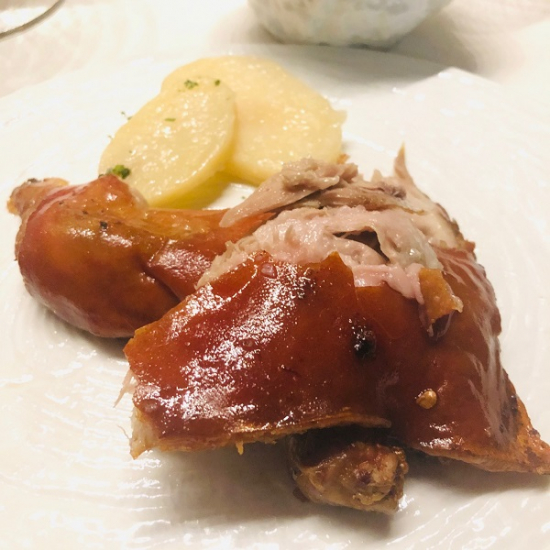 Because eating more was a near impossibility and Carlos knows my stance on dessert, we finished with a small plate of young Idiazabal cheese from the Basque country and two glasses of Patxaran on ice. 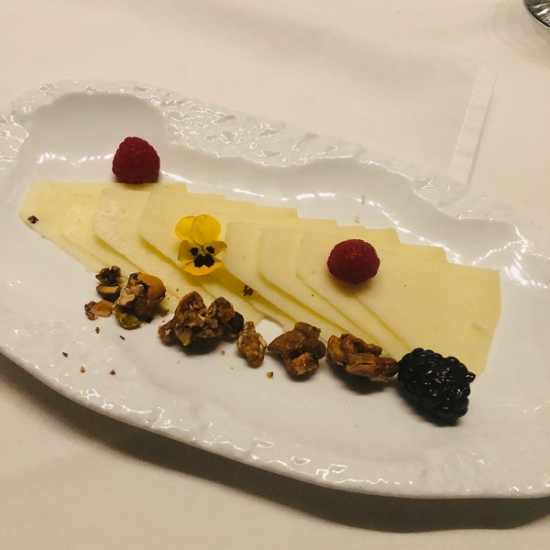 When we finally relinquished our seats to depart, the rain had passed leaving a calm, cool night. The flavors had triggered great longing for a stroll along the river in San Sebastian. I could imagine the street lights reflecting on the calm surface of the water. But, in my profoundly satiated state, I gladly settled for the constant stream of Mexico City traffic.

When a quick bite becomes a bottle of mezcal.
Scroll to top