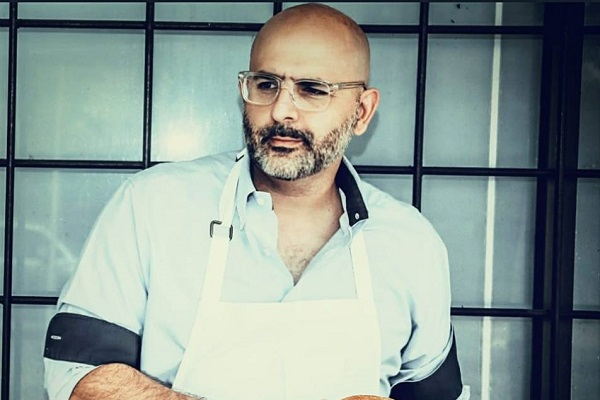 Chef Ramirez-Roure was born and raised in Mexico City into a proud Catalan family. At the age of 17, he began a steady climb to the height of baking and pastry excellence. He earned his Diploma in Pastry and, with the fundamentals under his belt, he left for Europe, where he studied and worked in Brussels, Paris, London and Barcelona. After returning to Mexico, Chef Ramirez-Roure worked in various restaurants and began his career as bread, chocolate, and pastry instructor. In 2004, he co-founded Sucre i Cacao Pastissería, the premier artisan bakery in Mexico City producing products for some of the top restaurants in the city. In recognition of excellence, he became a member of the Culinary Academy of France and President of the Vatel Club, which named him Chef of the Year in 2014 as the first baker to achieve this distinction. Ever the gentleman and willing instructor, Chef Ramirez-Roure shared his story and answers to the “Chat” with me over lunch at Nicos Restaurante:

Mexican food aside, which cuisine most excites you and why?
I love eating. It is very difficult to decide on only one. I love Asian flavors, from Japanese, Chinese and Thai, to the not very known Laotian or Vietnamese.
Catalan cooking takes me back to childhood, to apprenticeship years, and comfort my heart and soul. Easy to guess, right? Besides Catalán (which is pretty much like Mexican to me), I would say that I love clean and precise executions, where a great product is the star of the dish and is treated with respect and kindness. So, that leaves French cuisine as number one for me.

What meal most reminds you of your childhood? Who prepared it?
I remember Fridays with special nostalgia. My family used to get together, and we had the traditional “pá amb tomáquet”, (bread and tomato) where you just need good bread, tomatoes, olive oil, and some cold meats to have one of the most amazing comfort foods ever. Most of the time, we had escalivada (Grilled peppers, eggplant, zucchini and onions, peeled and dressed with olive oil and vinegar), Serrano ham, lots of cheeses, and tortilla.
If I must think of a dish, my heart is divided between the Catalan cannelloni and the Christmas cod, that mom cooks every year, and only once a year. I am the sous chef those days.

What culinary trend/fad do you refuse to follow?
I was born a rebel, for many reasons. I always like to go against whatever is trending. Even if I try so, trend gets to us many times. I just hate all the hype around the “gourmet” marketing. There is good food and bad food. Gourmet is tired, ridiculous and old fashioned. Another terrifying thing is when a professional, who lacks good techniques in his daily executions, looks for easy things to cover up his knowledge limitations. Example: integrating commercial candies to professional pastries. That’s just one. I could go on for hours…

If there was a soundtrack for your work life, who are the musicians/groups on the recording?
It would definitely be The Rolling Stones. They’re fun, they were the bad boys, they changed the world, and they are still Rolling. Cheers to that. Some moments would be played by Lynyrd Skynyrd, Led Zeppelin, Joaquin Sabina, Andres Calamaro, David Bowie, and The Eagles. Oh! And I can’t leave Rossini (great cook and opera man), Mozart, Beethoven and Tchaikovsky out of the list. Sometimes you just need to play nice.

Where will I find you on your day off?
Probably cooking at home for my family and close ones, or at any of my favorite restaurants. I have a list of them, and I don’t do much experimentation on that matter. I only explore, if I have good references for a new place. I stopped seeing Friends with frequency, due to my profession, and because I prefer to relax and spend my time resting, instead of partying. Maybe I will go back to it on my days off in the future. You never can tell.