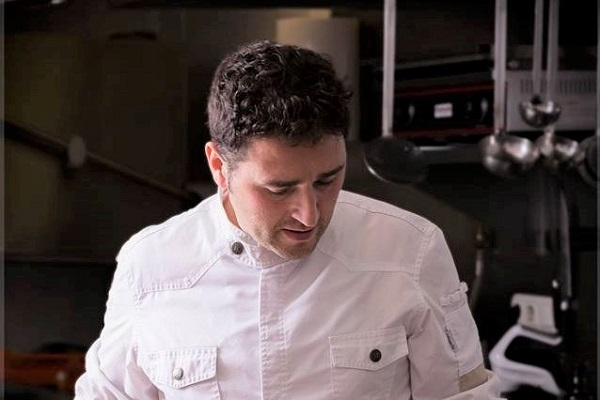 Chef Ismael Iglesias Esquivias is a native of Toledo, Spain. His was not the usual path to culinary distinction. Iglesias spent his early years learning another trade steeped in time-consuming pursuit of perfection and requiring perseverance and patience – carpentry. Then came real estate and a stint in the hospitality industry. At 27 years old, he moved to San Sebastián to follow his true calling and studied at the school of Chef Luís Irizar. He honed his skills in highly-respected kitchens including Juanito Kojua, Astelehena 1997, Branka, Alameda, Urepel, Narru and as head chef at Kata-4.

In 2017, Iglesias opened Restaurante Rita in the Eguia neighborhood of San Sebastián, set apart from the restaurant-dense streets of Old Town, Gros and Amara. Rita has the feel of a true neighborhood hang-out where you can sense the “regulars” among the crowd. The menu is adjusted in the moment to feature local seasonal product, in honest dishes that offer subtle hints at Iglesias’ Castilian roots. Yet, by his own admission, Rita is a work in progress. The kitchen is ever-evolving, most recently increasing its fire power to offer more wood-fired treats and exploring dry-aged beef.

On the summer night that I dined on the terrace at Rita, I did not yet know the exuberant, well-spoken Chef behind the pass. But, since then, I have gotten to know him as a clever, passionate, and exceedingly hard-working man. In our most recent discussion, we mulled over the “Chat” questions that I share for you here.

Spanish/Basque food aside, which cuisine most excites you and why?
Moroccan because of the unique spice flavors and the way they slow cook everything. They also cook many things with wood fire, which I appreciate.

What meal most reminds you of your childhood? Who prepared it?
A potato stew with chicken livers and hearts that was made for me by the best cook in the world, my mother.

What culinary trend/fad do you refuse to follow?
In my kitchen, I do not usually refuse to follow anything. I am pretty open and I think that every product type or way of cooking has its time and place.

If there was a soundtrack for your work life, who are the musicians/groups on the recording?
The Who – Baba O’Riley.

Where will I find you on your day off?
In the mountains, eating in Casa Urola, or in my house knocked out resting.