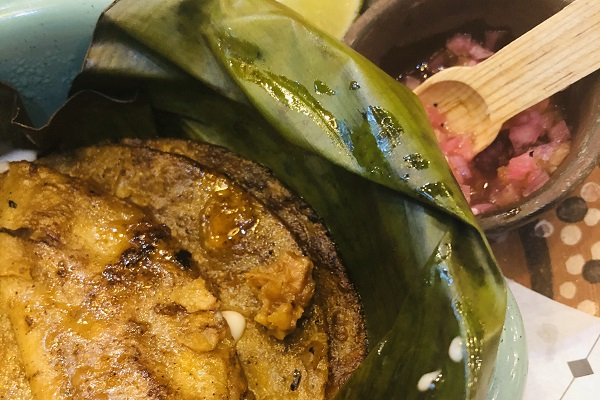 I have been feeling blue since I had to skip my flight home and remain in immigration purgatory. But, for me, there is one sure cure for the blues. So after several days of laying low, I headed for a restaurant that I have been wanting to try since it opened, Fonda Fina. The name implies a paradox. A fonda is a cheap place to eat, but in this case, elevated in a fina (fine) way. Indeed, relative to the neighboring restaurants in Roma and Condesa, Fonda Fina’s $10-15 US price per dish is reasonable and, if reputation holds, it is known to deliver in a truly fine fashion.

Backed by Chef Jorge Vallejo of Quintonil fame, Fonda Fina was created to showcase for the talent of Chef Juan Cabrera Barrón. Cabrera could never be accused of casual success. He is a graduate of Gastronomy from the University of the Cloister of Sor Juana in Mexico City, and graduated as a Pastry Chef from the Culinary Institute of America in New York. Along the way, he also picked up his Sommelier credentials from the University of Tepeyac. Although he had worked in some of the world’s finest restaurants and appeared on Top Chef Mexico, he first caught my attention with his restaurant, Los Compas, in Tijuana.

But, feeling a prisoner of my own sentencing, I decided to lift my spirits with a visit to the North Roma restaurant. My Metrobus card was burning a hole in my pocket, so I dolled out the 7 pesos (37 cents) and headed North. By my calculations, I saved approximately $8 on an Uber ride so I was entitled to an extra beverage with dinner. Sadly, I learned that Chef Cabrera would not be at the restaurant because he is opening a new place in Queretaro, Fonda Independencia. Via text, I teased him that the best time to evaluate a restaurant is when the chef is away, and he agreed whole heartedly with a laugh but exuded confidence in his team. 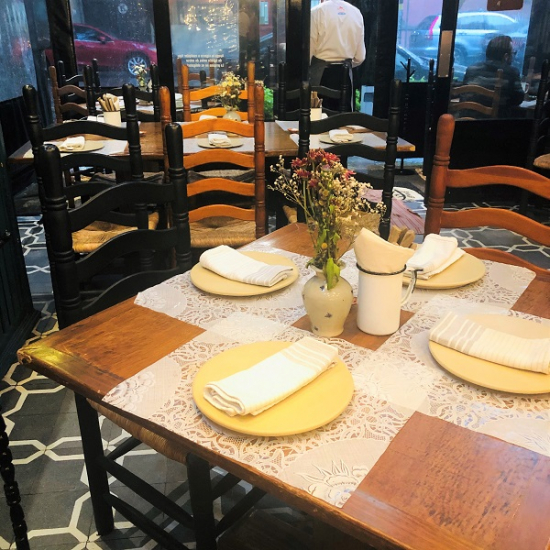 The warm and welcoming dining room at Fonda Fina.

Arriving in Fonda Fina I was struck by the warmth of the space. Wooden tables and thatched chairs create a farmhouse feel. The rain had started and I settled into the coziness, perusing the drink list. Wanting to celebrate of my maiden solo voyage on public transit, I ordered a tequila cocktail with lime juice, mint, and Damiana (a liqueur from Baja). It came with a whimsical pinwheel of celery and pear slices. Decorative vitamins, in my book. 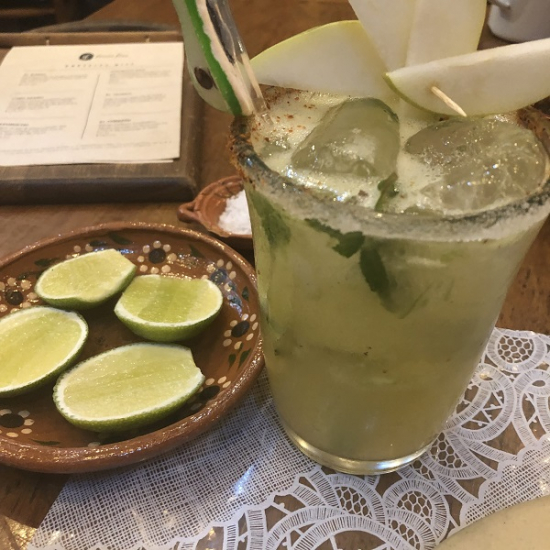 “La Perla.” A pinwheel of pear slices propped up on a celery stick, embellished a cocktail common in Baja California Sur.

The menu read like my sweetest dreams. There were, of course, seafood options and salads but the bulk of the offering veered toward savory, slow cooked meats. You name it, it was there. Lamb barbacoa, confit chamorro (pork shank), a stew of beef tongue, rabbit and, of course, steaks and chicken dishes. I reviewed the provided details of the preparations and I admit that I began to grow skeptical. Often, when a chef tries to incorporate multi-regional influences in a single menu, the execution falls flat. On the menu, I saw a recado negro sauce from the Yucatan, multiple preparations from Oaxaca, a Sinaloa-style aguachile, and an adobo in the style of Hidalgo, among other elements. Still, hardly able to contain myself, I started with a small basket of tacos de canasta de lechon (steamed tacos of suckling pig), seasoned with adobo (a thick sauce made from ground chiles and spices) and accompanied by a Yucateco-style pico de gallo of spicy, pickled red onion. The rich meat and piquant topping delivered a spectrum of flavors in the way a symphony delivers sound. 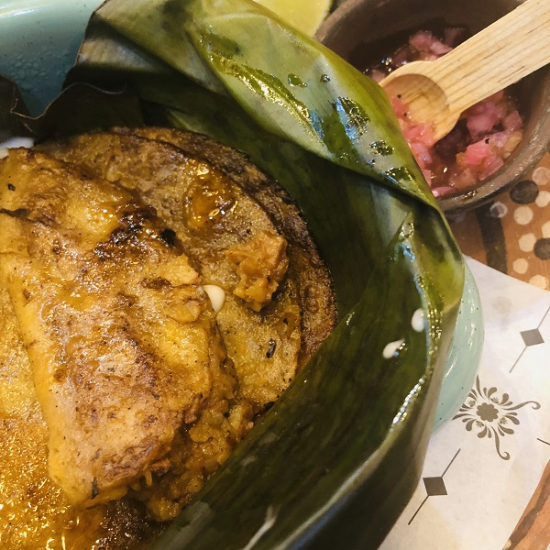 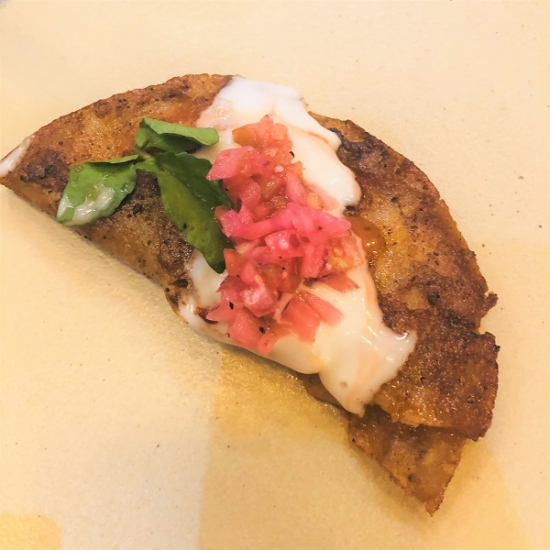 Next up, one of my favorites, bone marrow. Three huge roasted marrow bones, planed through the middle, arrived at the table with a thin crackling across each surface. Breaking through with a small spoon, I found molten marrow begging for a tortilla ride to my mouth. But, better than a tortilla, Chef accompanied the bone nectar with tetelas (small triangular blue corn cakes) topped with a rustic pate of beef cheek. With a spoonful of marrow, and a bit of fresh herb, the bite was spectacular. 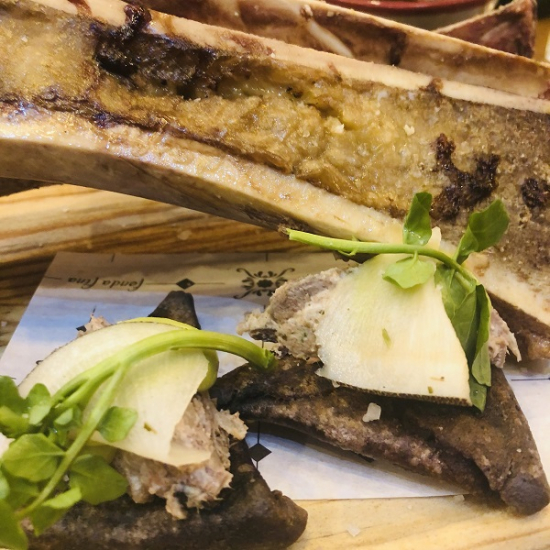 I ordered a mezcal and, in honor of the classic Mexican dish that I have only recently come to know, tostadas de pata, I asked to try Chef Cabrera’s version. It was vastly different than the common pile of cubed beef foot, lettuce, cheese and cream. Presented like an aquachile, thin sheets of marinated foot and cueritos (pig skin) mingled with fresh verdolagas, radish, mustard seeds, and a few individual beans resting like black pearls on the plate, in a clean vinaigrette of lime and garlic. The dish was perfectly timed in my self-directed tasting menu as a palate cleanser after the unctuous marrow bones. Not a bit remained on the plate, but for a few mustard seeds too unruly to trap with my fork. 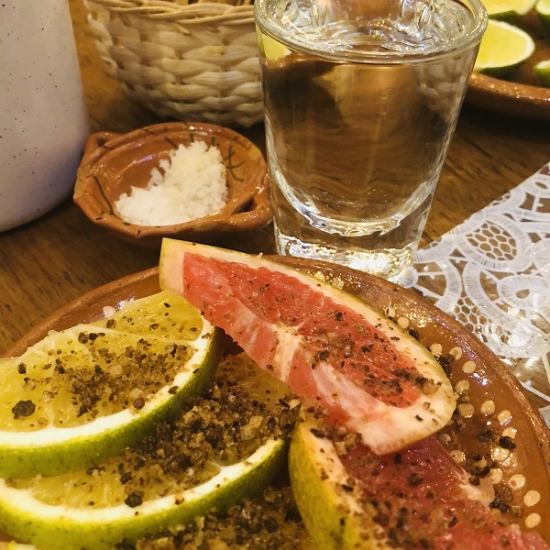 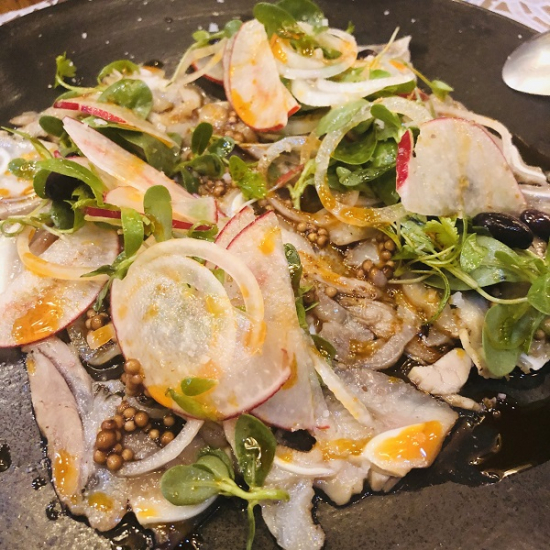 “Tostadas” of vinegar and chile-marinated beef foot and pig skin. Tostadas were provided but utterly unnecessary.

The anchor leg of the meal was a cazuela (stew) of silky rabbit meat slow cooked in an intensely flavored broth similar to barbacoa. It was scented with avocado leaves, pluque (a fermented, mildly alcoholic beverage made from the sap of the maguey plant) and toasted garlic. The stew included large kernels of hominy, hearty bites of cauliflower, and soft threads of onion. It should not have been physically possible after my earlier indulgences, but I finished the stew with ease. 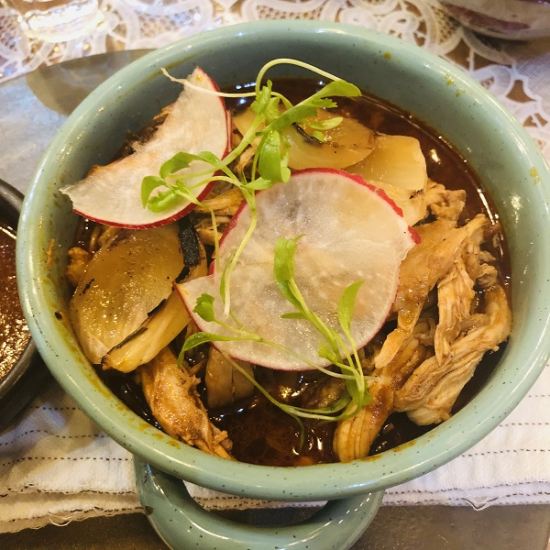 As I drained my mezcal cup, I watched a group of Millennial Americans take the long table by the door. They read over the menu excitedly asking each other questions. One of the boys asked provocatively, “Should we try grasshoppers?” to which the girls replied in unison, “Ewwww, no!” They had no idea the wealth of gastronomic opportunity Chef Cabrera has created in this one menu. In an evening, they could taste the flavors of Mexico, in exceptionally well executed interpretations of the traditional dishes. I wanted to coach them with a wikipedia-like crash course in all things delicious, but I refrained. Instead, on my way out, carrying a small container of tacos and tetelas, I stopped briefly at the head of their table. They looked up at the stranger quizzically and I said, in my most encouraging voice, “You SHOULD try the grasshoppers.”

Walking through the neighborhood, satiated and still turning flavors around in my mind, I saw a dog, soaked through by rain, shivering in the bushes of a small park. She had a rope around her neck, which she had obviously chewed through to achieve her sad state of freedom. Although she was far to timid to come to me, the aromas wafting from my leftovers lured her out of the bushes. She was cold, wet, and alone but she ate like a queen until nothing was left and I was all too happy to share the experience. 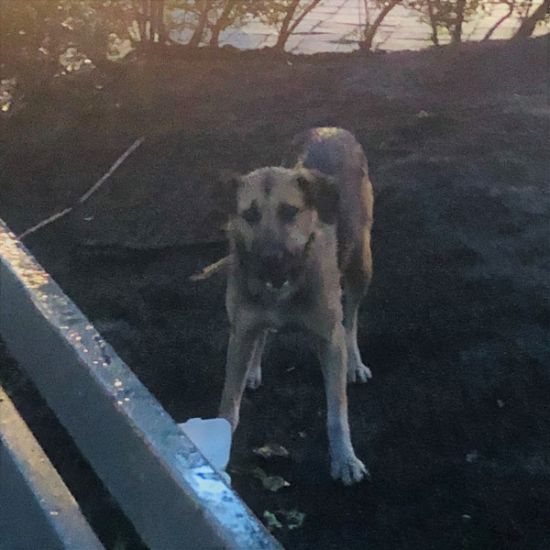 An unlikely dinner companion who is, no doubt, a huge fan of Chef Cabrera now.