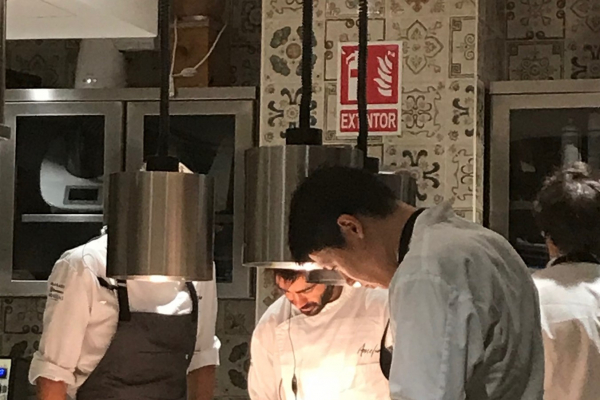 I don’t come to San Sebastian, Spain, for “new”. I come for the comfort of a dining routine that slips on like a glove, follows the appropriate path (never missing the egg course) and which reassures me that tradition need not be staid. So, for me, to give one of my precious few meals to a new restaurant means denying myself Hilario’s pigeon, Xabi’s pintxos, Elena’s xipirones, Igor’s lenguado… The stakes are high. But, Amelia, just a couple years old, was a gamble worth taking. From the moment I contacted them to beg for a table in their already booked dining room, they blew me away. An email reply broke the bad news, “Yes, the dining room is fully reserved.” My heart sank. But it continued, “However, we can accommodate you at the kitchen table, if you don’t mind.” I did not mind.

The restaurant is tranquil and elegant with an organic sensibility and hints of whimsy. I spied a decal of street art peaking out from a baseboard in the stairwell. I was escorted from the dining room, down the stairs into the kitchen to find a singular place setting at a large wood table. Nine cooks and Chef Reyes were preparing for the first seating of the night. All looked up with polite smiles and then dove back into their tasks. I settled in, wide-eyed like a child.

The kitchen is beautifully tiled from floor to ceiling. A second room lurked behind a magical window. All night, dirty dishes were sucked into the small window through which a tireless soul clinklessly washed and sanitized. The aroma of the first dishes firing was intoxicating. I could see the treats queued in their naked perfection awaiting the fire. My dedicated server, a soft-spoken young woman from Ecuador, explained the dishes in Spanish, at my request, and the charming Sommelier descended the stairs with glass after glass of bubbles and wine. My attention darted from one to the other and back to the cooks whisking, plating, grilling. My mental state was that of an unruly golden retriever surrounded by bacon-wrapped ducks waddling about.

I’ve been in several Michelin-starred kitchens but what I saw at Amelia was different. With Chef Andoni Aduriz you can hear a pin drop. With Chef Eneko Atxa, there is the constant formal ping-pong of Oye!-Oido. With Chef Reyes, I saw a team working in concert with intense focus but also encouragement and, at times, laughter. At one point mid-way through service, Chef walked over to one of the cooks, put a hand on this shoulder and all but whispered the need for urgency. In another, he called an order and followed it with “Gracias.” I watched as Chef shook his head at the voice piped into his earpiece from the upstairs dining room. He calmly responded using the microphone dangling from his coat and quietly issued orders to his cooks. A crash of plates shattered the peace and all eyes pointed toward the ceiling while Chef Reyes flew up the stairs like a gazelle. I was utterly entertained. 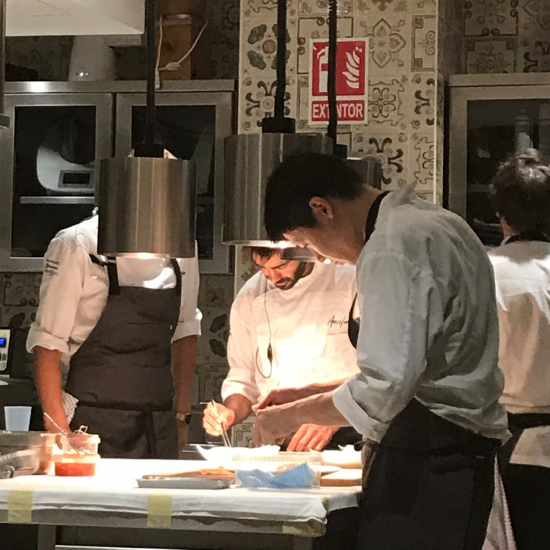 Throughout the night, the team communicated in a fluid stream of Spanish, English and Basque – even a little Japanese, as if I personally had selected the voiceover track. Directly in front of me, a burly chef de parte manned the sputtering grill station. Intermittently, a pop sounded and sparks leapt from the coals reaching my table. To my right, the rest of the team convened in a small but efficient space. 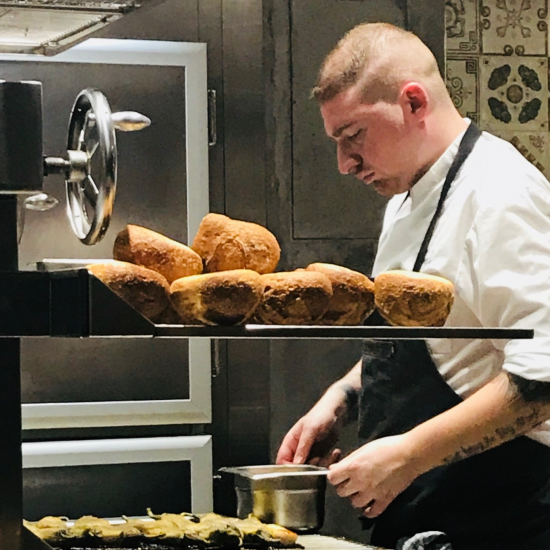 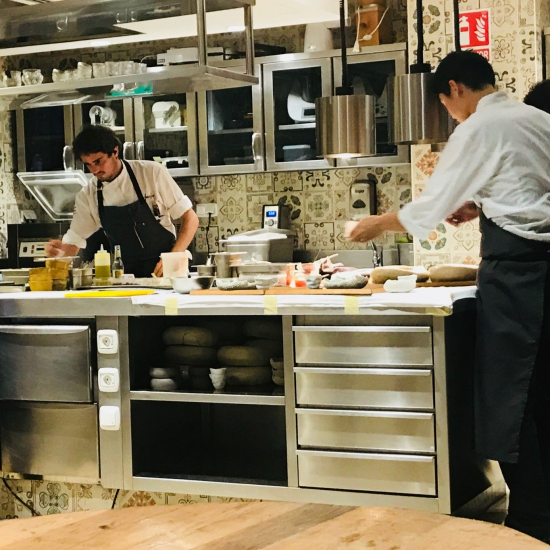 Enough about that. I imagine you would like to hear about the food and wine. Executive Chef Paulo Airaudo’s tasting menu featured the local ingredients of the season and vaguely resembled a traditional basque line-up but with unusual touches like a Criolla that hinted at his Argentinian roots. 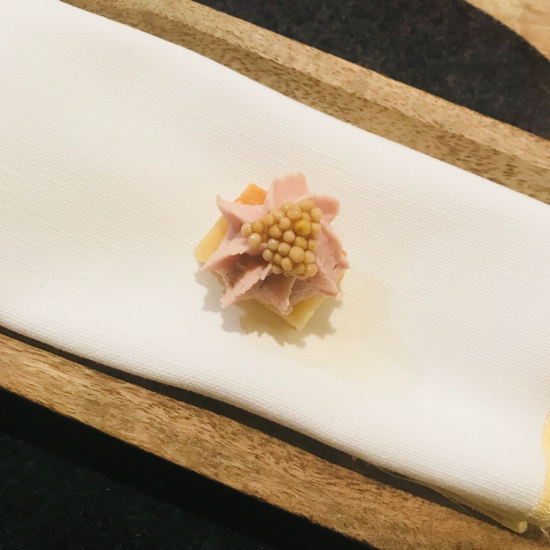 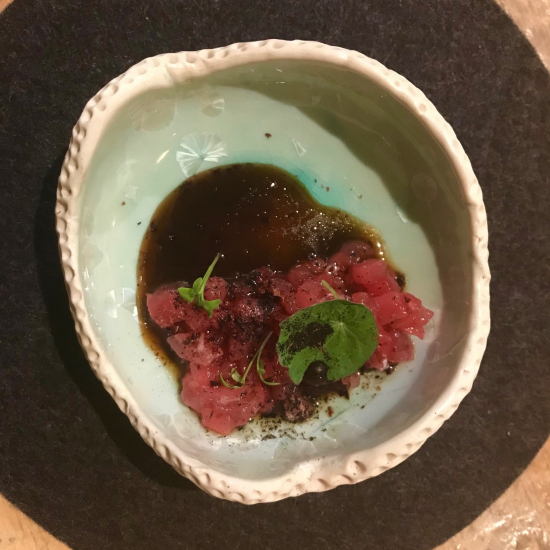 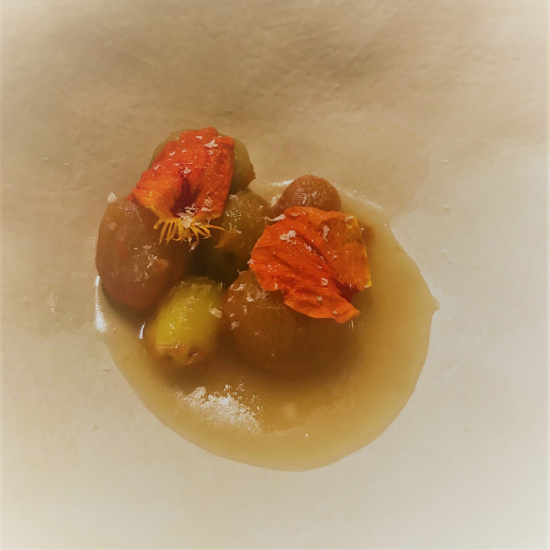 Tomatoes in consomme and ham broth. 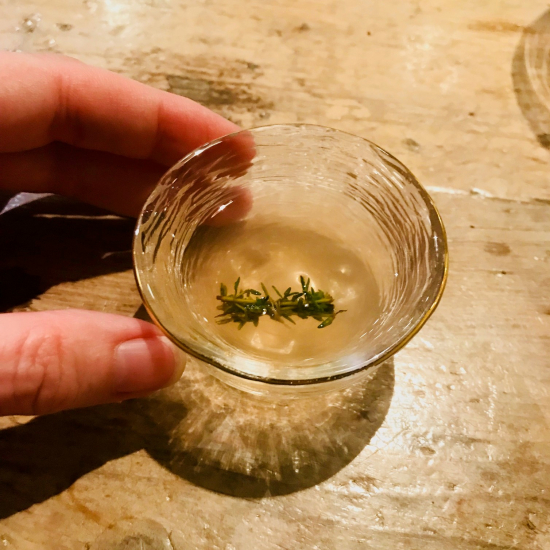 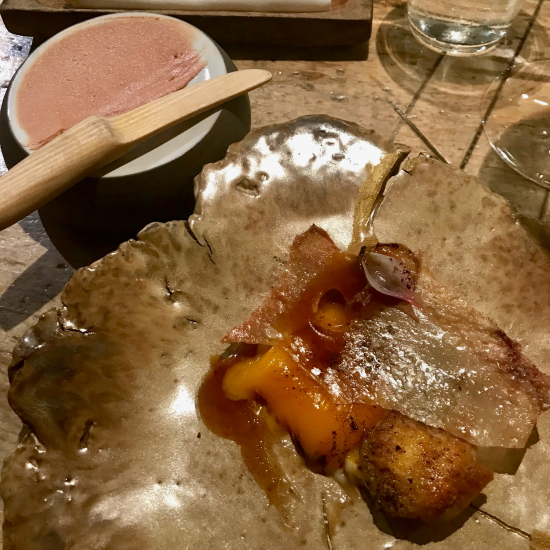 The essence of all things chicken: A low temperature egg yolk and fried dark meat beneath a crisp of chicken skin and pearl onions with veal demi glace. (Renato Kebler Chardonnay 2010) 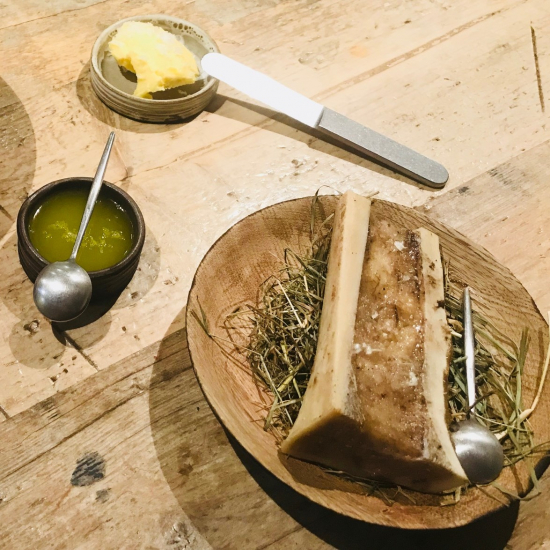 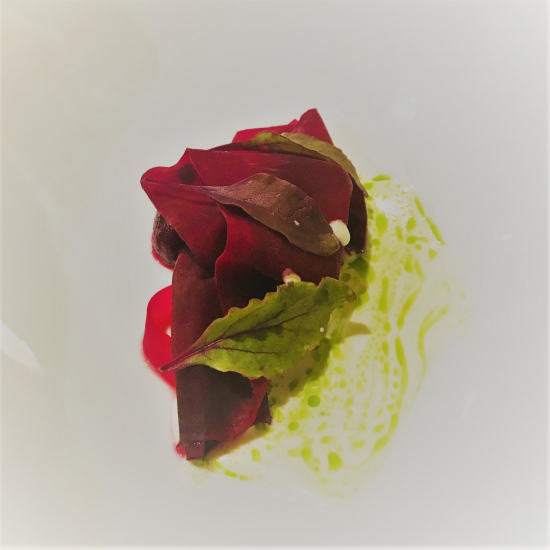 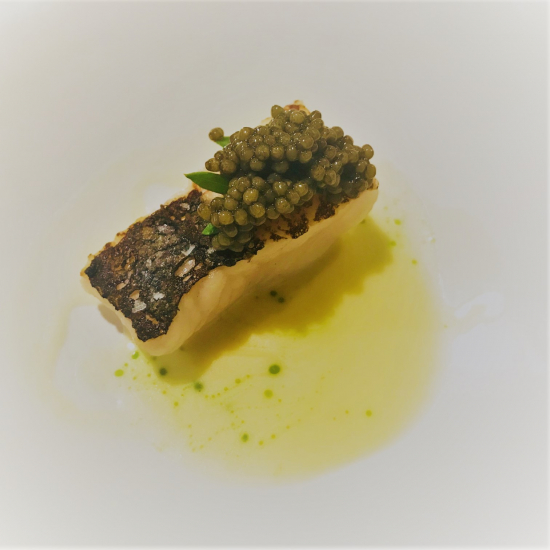 Confit and charred Hake with beurre blanc and Italian caviar. 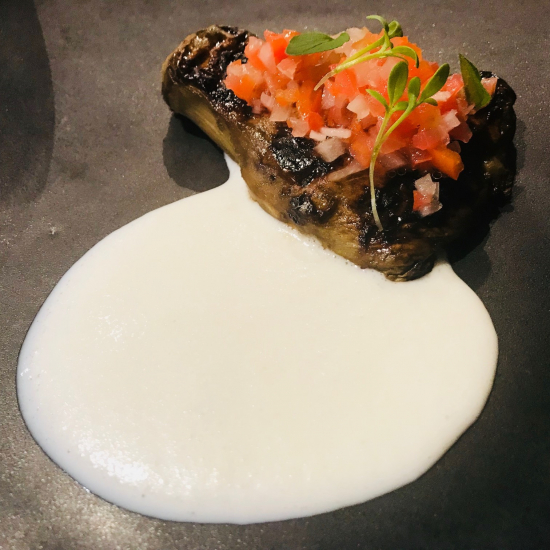 This is the moment in a Basque menu when pigeon, woodcock, or other dark, rich meat would signal that the finale is near by taking the patron to the brink of satiation. But instead, Amelia twisted the rules. 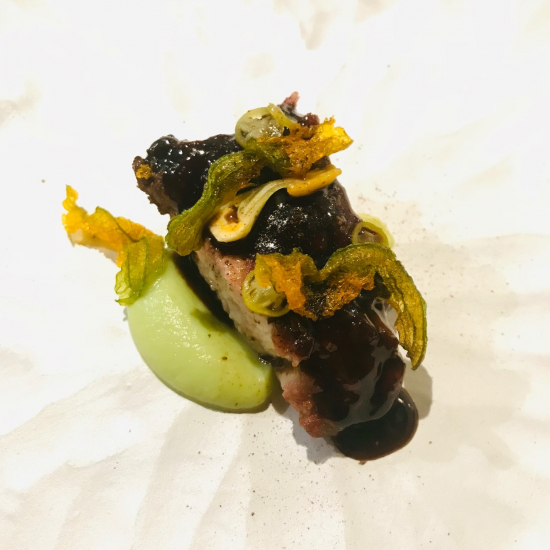 Sweetbreads finished on the fire, with black garlic sauce and zucchini. (A Fralluca Cabernet Franc.)

My stomach was already convinced but, as we began to transition into dessert courses, Amelia won me over heart and mind. Desserts were bright, fresh affairs that this self-avowed sweets hater did not have to politely choke down. A moscato Lumine, Ca’D’Gal accompanied the homestretch plates. 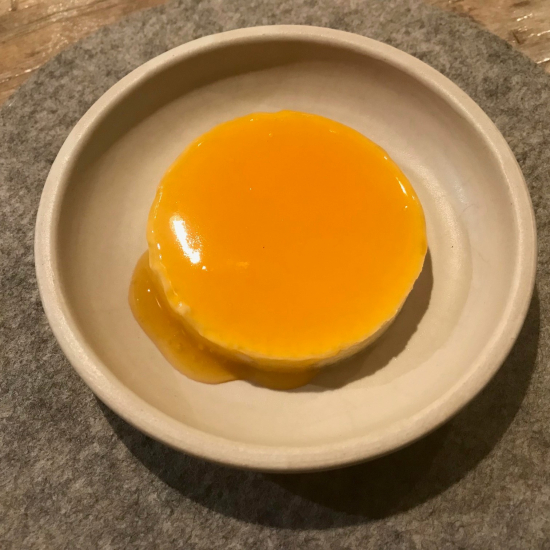 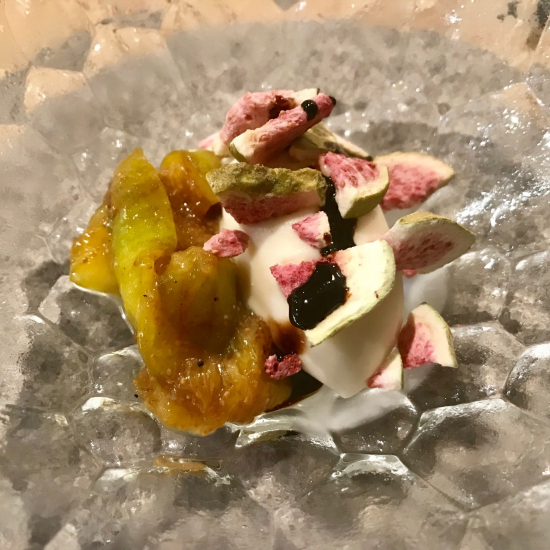 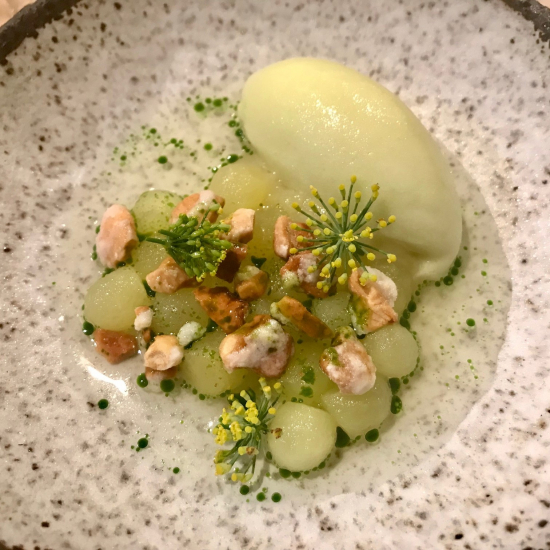 Apple finished with fennel and dill. 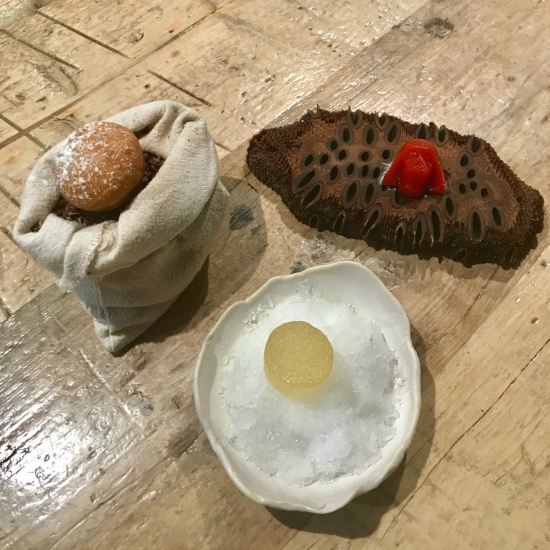 Petite-fours including a strawberry jelly Darth Vador and a gift of house-made limoncello.

Although I was eating as quickly as possible in my dazed state, I could tell by the orders on the pass that I was running behind the patrons upstairs. I didn’t want the show to end. As it passed 10:00 pm, the first cook shed his whites for street clothes and bounced up the stairs. The cleaning, storing, and polishing began. I had not seen my server in a while and I hoped that I had been forgotten. I’d happily curl up on the table and plan a late night refrigerator raid. But, as it grew quiet in the kitchen, the day, the food, and the wine caught up with me. With gratitude and respect, I ascended to the dining room feeling like I had stolen the crown jewels.

I am glad that Amelia is no longer new to me so I can visit again and again.